Welcome Guest! Your last visit was Wed Dec 31, 1969. You have made 252 posts! Please welcome our newest member, Darkprincess!

Name: Sharingan
Possessors: Uchiha
Type: Dojutsu
Location: Nikkousato | Sun Village
Appearance: Members of the bloodline are mostly known for their black hair and eyes, but besides this have no standing features that make them noticeable in a crowd.

Abilities:
The Sharingan grants the wielder two broad abilities: the "Eye of Insight" and the "Eye of Hypnotism" Although the abilities are not literally restricted to certain eyes, the Sharingan can only be used to its full potential when both eyes are together. This is to say that in the event that one eye is stolen or destroyed, the user would only have access to the benefits of the remaining eye. The Sharingan comes in stages, with each stage granting more power and skill. The stages can only be unlocked by times of great stress or suffering (And must be done in character, or through a flash back.)

The First Tomoe is granted to the user at birth, and is available when they first activate their sharingan. This stage can be first activated when a uchiha experiences stress or a high influx of emotion and normally happens around 10 or 11. 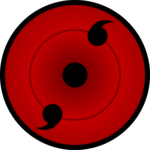 The second stage can not be obtained until after the first stage, and normally occurs when the user is close to death or has witnessed a loved one close to death.  This stage can be unlocked by being knocked unconscious, watching a friend or loved one knocked unconscious or preventing someone from being knocked out. Once this happens your eye grows the second tomoe, advancing its power. 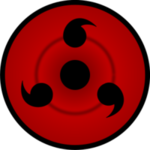 The third stage can not be obtained until the first two have been achieved, and can not happen until someone who posses this bloodline knows true pain and has seen death, or has prevented death with their own hands. In order to unlock this stage, you must have killed a player character or stopped a player character from being killed. This must occur in character. 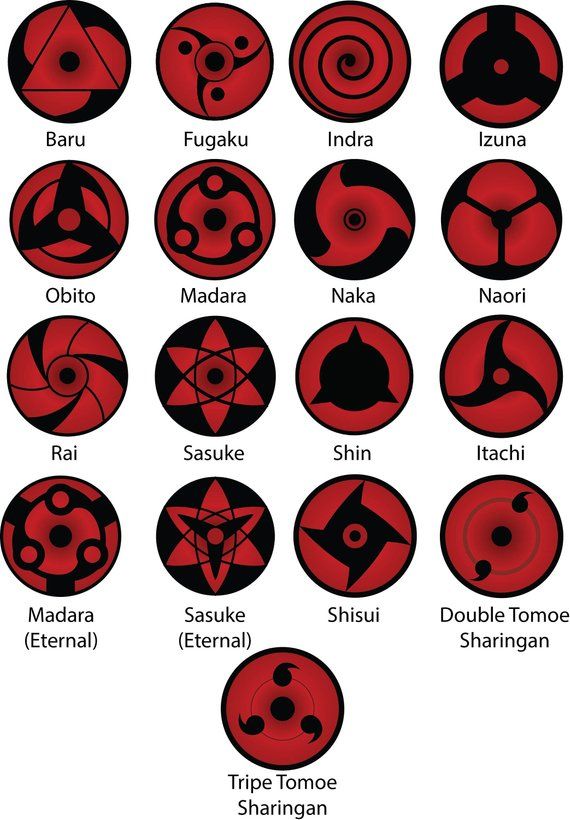 The final version of the Sharingan is the Mangekyou, which takes on a completely different look than the normal eye, and differs from person to person. Once unlocked, each person Mangekyou will look unique, and grant them unique properties. However, in order to unlock this stage, you must kill someone with your own hands or stopped someone from being killed. However it can not just be anyone, and must be someone with some sort of emotional connection. Because of this some clan members kill off family or best friends to obtain this power. This must be done in character and to a player character your character has a connection with.

Eye of Insight (The Left Eye)
The left eye houses the eye of insight, which allows the owner increased reflexes and the ability to see better detail and quicker speeds. Their eye acts as a telescope, slowing down the momentum of what they see, allowing them to see in slow motion basically. This does a couple things. The first and primary effect of this eye is they can see fast movement in great detail. Any one who uses an effect that causes them to go unseen, or move faster than the eye can track, the Sharingan will instead allow you to see this movement. You can also see great detail regardless of how fast its moving or what may obstruction the view. For example if something is written on a kunai as it flies towards the air, you can make out what is written as it moves. This allows you to also read a jutsu as it is being performed, giving you the ability to tell what specialty and what element a jutsu is before it gets used. So if a Genjutsu gets performed, even if you can not tell the genjutsu apart from reality, you can still know a genjutsu is in effect, either on yourself or on another person. Because of this ability to read jutsu, you can actually copy jutsu being used by others, and store them in your eye. Once copied, you have access to that jutsu forever, and can perform it as your own. In order to learn a new copied jutsu, you must have enough empty slots, and forget one if you do not.


Eye of Hypnotism (The Right Eye)
The Right eye houses the eye of Hypnotism, which allows the user the ability to see chakra and perform genjutsu type effects. While active the user can see traces of chakra, giving them the ability to see through certain types of jutsu, especially Genjutsu. When a Genjutsu gets used, they can see the chakra traces left over from it, and can tell if they are in one, or if someone else is being effected by one. They can also track chakra traces, seeing it as it moves, which allows them to see jutsu in effect. They can also utilize jutsu and effects that share qualities to genjutsu through this eye. They can use bloodline exclusive genjutsu even if they have not taken any genjutsu points in the specialty system. And those jutsu do not need hand signs to activate, they simply need to make eye contact with the right eye. Even though this lets you see chakra and track it, you can not see through solid objects, or pure sources of chakra.


Mangekyou Sharingan
The Mangekyou Sharingan is a unique eye that can only manifest after certain requirements have been met. You do not need to have both eyes to unlock this version, however, if an eye does not belong to you, you can only obtain the same abilities that the original wielder would have earned. Once unlocked, the owner of this eye gets a very unique and powerful ability. This ability differs from eye to eye, and no one eye has the same potential. Once unlocked the owner gets the right to create their Mangekyou ability.


Weakness:
Due to the amount of power the eye possess, each stage comes with its own list of requirements needed to obtain. All of these need to be done in character and can not be earned other wise. In order to unlock the next stage, the previous stage needs to have already been earned in a previous topic, and the needed requirements must be completed. All of the stages also require that the owner suffer a certain level of pain and suffering, with each level needing higher and higher instances of this suffering.

Because of how powerful the eye is, it is coveted by other shinobi, and people often hunt the eye for their own use. If the eye is damaged or removed in any way, the owner loses all power obtained from that eye, including jutsu and unique skills.

Keen Sight Curse (Bloodline Weakness) - Despite their ability to percieve chakra and illusions, the keen eyesight of the Bloodline causes blinding related jutsu have twice the effect and will interrupt any action being taken at that moment by the bloodline possessor. This means if a flash of light or blinding attack would blind the user for one post, it is extended to two. This will also cause the eye to deactivate instantly, needing to be recast the next post.