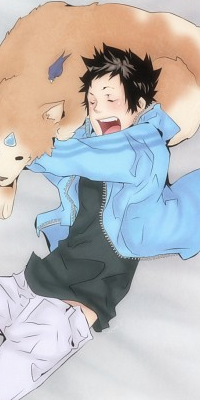 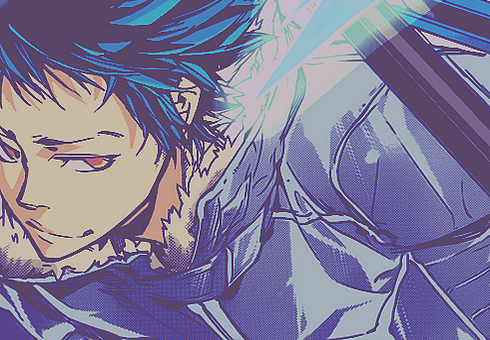 Shinra is a young man a bit on the above average side in height at 5'11 but weighing around 168 pounds. Lanky with a bit of muscle definition, Shinra has a body honed from years running, playing, and training. His skin is a light tan with only a few scars blemishing his skin, the most noticeable being a small cut on his chin due to a training accident with a kunai. Shinra, like most Inuzuka has the tell tale messy dark hair (his being black instead of brown) and the somewhat sharp, wild, eyes. His are far more softer than usual and hold an amber brown hue to them instead of the usual black, gray, or brown eyes his clanmates hold. Likewise, he also bears the same animalistic sharpened incisors and claws that his clan is known for as well.

For clothes he tends to wear whatever is comfortable, he's not one for style yet happens to wear somewhat fashionable clothing despite himself. Tank tops, tees, hoodies, and jackets are his preferred tops. Whilst jeans, shorts, and cargo pants are his go to leg wear. His feet are normally clad in either sneakers or the tried and true "shinobi sandals" that many are known to wear. As for his headband, it can be found tied on his right arm like an armband proudly bearing the sigil of the Moon Village. Occasionally he can be seen wearing gauze somewhere on his person due to his tendency to get hurt due to his recklessness. Mainly on his face, arms, and hands.
Height: 5'11"
Weight: 168 lbs.

Shinra is a generally laidback and genuine young man. Always speaking from the heart rather than the brain he is a very honest person. He doesn't mince his words and comes off brutally honest if somewhat blunt with his speech and mannerisms. His lax nature should not be mistaken with laziness, as he is far from it. Dedicated and loyal to a fault, Shinra holds a very strong sense of competitiveness and desire to improve himself. Mixed with the general hotblooded rowdiness that those of the Inuzuka are known to possess gives him an uncanny sense of stubbornness, pride, and steadfastness.

He's not one to run away from his problems, instead rather take them head on. However, this tends to make him quite reckless and coupled with his less than stellar focus often leads him into many blunders that could easily be avoided if he used his brain a bit more thoroughly. All and all, he's a good guy with a strong sense of understanding of himself, his wants, and intentions. Yet his inability to read the mood leaves him appearing much like a goofball despite his efforts. Even then he is not dumb and is in fact very perceptive, having a shrewd personality when the time calls for it. It's just often hidden by his unassuming and carefree nature.
Likes:
- Dogs.
- Nighttime.
- Food.

Shinra Inuzuka was born and raised within the Village of the Moon - Gekkousato. He was apart of the Inuzuka Clan, born into a family of five other siblings. Life was always an adventure for him and his siblings and nothing was ever private. Because of this he developed a very straightforward and honest attitude with everyone around him. Not learning the essential skill known as "tact". This continued when he entered the Academy at the age of six years old - proceeding in causing a fellow classmate to cry because he bluntly said her "hair looked funny." Suffice to say, his first hour in school was spent standing in a corner facing the wall to the laughter of his classmates.

Despite his mistakes he was an honest and hardworking student. What he lacked in studious nature he made up with his natural affinity to fight and his knack for combat tactics. His ability to work well with others mixed with his physical prowess often made him one of the top students in anything that didn't require a book. When he was seven as per custom for his clan, Shinra gained his dear friend and lifelong partner, a ninken puppy who he named "Hachiko". The two were inseparable and got into all sorts of mischief throughout his youth at home and at school.

However, such halcyon days were destined to end and graduation soon came and went. Shinra spent many years training and bonding with friends, family, and puppy partner until the day came for him to become a Genin. Now at eighteen, Shinra is a freshly graduated Genin on his way to to a brand new adventure as a fellow shinobi of the Moon Village. What adventures await him are unknown. But one thing is for sure, he won't be going at it alone... Shinra's (and Hachiko's) journey as a ninja has only just begun!
Face Claim: Takeshi Yamamoto, KHR!
Owner:  Luxu.

Character Application Approved. You can now work on your character sheet and claim your starting package!
Current date/time is Tue Apr 20, 2021 9:46 am