The Objective:
Name: Wild Animal Attack
Rank: C-Rank
Participants: Moon Village, Sun Village, Missing Ninja
Type: Group Mission
Reward: 25 EXP, 10 Ryo
Details: A dangerous wild animal has been spotted out in the area, terrorizing travelers or local villagers. Your mission is to hunt this animal, and either get it to leave the area or take it down. If it remains in the region it could cause major damage or even hurt someone, so it is important to remove the beast as delicately as possible.
Requirements: Each person must make at least 2, 400 word post.

Ryojin was practically shoved out the front door by his father. After a couple odd meetings with some peculiar sun shinobi, some shenanigans and in house competition with a fellow shinobi, Ryojin was exhausted. His black hair wasn't neatly kept today as per usual, instead it was simply laid about his bony shoulders.  His headband was around his neck loosely and he was in his flak jacket as always. He left his tools at home for this one as this mission was in his line of expertise. It was intended to be a silent capture type deal. This was the sort of ninja work he enjoyed the most, even despite not being the most silent himself. His father was adamant that he continue going about and meeting more shinobi. Something about making real friends and seeing the world through other's eyes.

He made his way up to the gate. He wasn't sure who his father had decided to send him out with on a mission this time and that moderately frustrated him. His father knew he liked details asap not on a whim, but it didn't really matter in the end. He was sociable enough, maybe even too much so, that he would have no issues. It didn't take long for whom his father had described as the other person to make their way up to the gate and with that, Ryojin gave a soft smile and a slight bow. "Ryojin Tosho at your service! Father said you'd be accompanying me for this one! I look forward to completion of this mission. From what I understand it's an easy bag and grab. I think it's a boar right according to the mission specs? I'll make this one easy okay? This is my cup of tea. Lets go." With that much and no more Ryojin grabbed onto his partner's hand and off they went toward the jungle.

Upon arriving at the  edge of the jungle, the boar tracks would be easily visible among the mud. "I wonder how it got way out here? Whatever it's unimportant. Do you handle the cold okay? Well regardless, I'm going to make it snow so get ready. The beast will probably head for cover. We'll just search root covering and empty tree hulls large enough to house the beast. I have a jutsu that is useful when it comes to capture, but I'm going to need you yourself to find some cover if you want to rely on that. It's weakness is height. Climb a tree. Unless you'd rather we confront it directly. I guess I'll leave that choice to you."  With that said, Ryojin led the way into the jungle. He was pretty familiar with it anyway.

Following the tracks would eventually lead them to a small stream. By this time, snow was beginning to likely accumulate and anything that would've deterred them from the task at hand would be well into shelter not even used to the cold that was beginning to take hold. In humid environments like the jungle by moon, it was almost too easy to sway the weather in his favor. He took in a breath of the now rigid air. It felt like home to him. Interesting that he could still bring that with him. 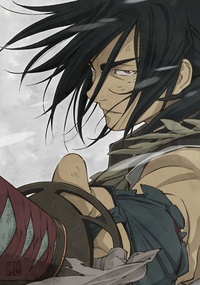 Cairo had woken up earlier than normal, which was not saying much seeing how he normal awoke sometime after noon, and even though he was up earlier than normal, he was still late for the days activities. The scruff man had almost forgotten that he had promised an old friend to help out with a favor, a favor he was already regretting agreeing to. He was not a man who normally went out of his way to help others or be a team player so to speak, but this man had been very kind to him in his youth, and now the mans son was trying to make it as a shinobi here in the moon village. The boy still had spirit in him, and who was Cairo to squash it prematurely. This was not going to make him move any quicker than he wanted to though. Slugging around the barracks, he gathered his belongings, threw on a dirty, stained shirt and slide his blade into his sheath on the side of his waist.

It was a beautiful day out, clear blue skies, warm afternoon air, villagers going about their day. It brought joy to his heart to see such an active place. It did not take him long to near the gate, his nimble eyes already locking onto the boy he was meant to accompany on today's village. The boy, Ryojin, was eager for sure, quick to bow and introduce himself to Cairo. He started spouting off mission specs and ideas, which went in one ear and right out the other. "Yeah Yeah kid, good to meet ya. Name's Cairo. Let's get this over with quickly shall we?" He readied himself, taking one last glance of the mission briefing, and prepared to head out. That is when the young boy Ryojin grabbed his hand suddenly and went to move forward. Cairo instantly jerked the hand away and glared at the boy. "No, there will be none of that ok?"

It did not take them very long to leave the village and enter the dense jungle. They were closely nearing the location that the beast they were hunting had been spotted, when the young genin started speaking of strategy and his plane to capture the beast. Half listening, Cairo pulled his blade out from his sheath, and started to scan the area. The deeper they went, the more odd the situation had become, and if only he had paid attention, would the slender man know what was actually going on. But because he had not paid attention, he was taken aback when the snow started to fall. While it was unexpected, it was actually a good plan, pushing creatures not used to the cold either out or into hiding, and the snow on the ground would be great for following tracks. That is when he heard it, rustling in the brush off to the front of them. Eyeing Ryojin, he motioned a finger over his lips, signifying they should be quiet. Hopefully the boar they were after was what was making the noise in the bushes.

Ryojin would let Cairo take his approach toward the boar. As Cairo passed Ryojin, he grinned a bit sheepishly and made his hand signs. An ass gets what an ass wants. He was sure his father had told Cairo how his jutsu worked in a bit more detail. He had also given him a fair warning. As he wrapped up his hand seals, a blue mist crept from him. The moment the blue mist wrapped around cairo, he would feel exactly what it was for. The sheer cold of the mist would be just below shocking to the body.

The boar at contact, would begin it's attempt to run, but Ryojin could keep up with this boar and he made it a point to not only keep up with the boar, but to turn it into a game and keep some distance between him and Cairo. He was sure that this was going to be quite the game, but it wouldn't last long.

He had stated that this was his specialty. It's time to show this guy that he wasn't a push over either. Though, in Ryojin's mind, it was a little too late. It was gone. He was already beginning to look at this as a game and he had pushed himself into the mode where it was time to win. "Let's make this good Cairo."