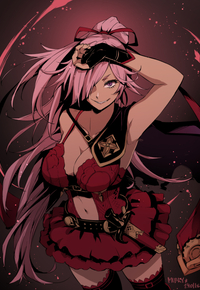 Clan: None
Bloodline: None


Appearance: Yuri has long pink hair and dark blue eyes. Her height is five feet and four inches and her weight is one hundred and twenty-five pounds. She has tan skin with a body that is petite with just a little bit of muscles in her arms, usually covered in sleeves that gives off the impression that they're just slim. Her style of clothes usually weight between feminine such as dresses and skirts and sometimes that appear more battle oriented, but when she's off duty from being a ninja she slips into more comfortable wear like t-shirts, shorts, sweatpants, and so on. Her hair can also be styled into other looks, but her best route is being let down. She could sometimes also be found with a cigarette in her mouth and a drink in one of her hands.

Personality: Yuri is a mixture of being empathetic, being able to comfort the hurt and console the damned and having a kind heart, and having a sharp tongue that's ready to stab. She's extremely laid back with a relaxed and soothing sound which makes her more approachable and isn't no stranger to starting up a conversation. She has no problem lending support and offer some guidance based on how she sees things. It makes her appear kind and understanding, a strong suit that Yuri would like to admit. She's an extrovert, so socializing is also a strong suit of hers. Yuri's sarcasm and dry humor would usually be taken with a grain salt, sometimes intentionally crossing the line of what's considered acceptable to joke with or not. She also has self-deprecating humor as a way to cope with the events.

As kind as she looks, Yuri is a realist and a pessimist. She does try to see the brighter side of things to avoid being negative, but in the end she always expects the worse to come. Her playfulness, usually screened as harmless or otherwise, it can come across as insensitive or inconsiderate, but sometimes it isn't done on purpose. Her assertiveness enhanced her unfiltered honesty and isn't afraid to get blunt. At the same time, she lies when it's necessary or just for the fun of it. She usually doesn't snap, but push her towards the edge and she'll put on a show. She holds some snobbish traits since she comes from a wealthy family such as being materialistic and greedy for money, but it doesn't exclude the idea that she can be down to earth and humble. Her mannerisms are usually chic and gestures that are tied to grace, influenced by her father.

History: Yuri is from a wealthy family of a loving mother named Aiki and an adoring father named Bunko. She was surrounded by wealth, so there was no surprise that she was at one point spoiled by her father with materialistic items that kept Yuri happy. It was her mother that wasn't so keen on Buko's excessive use of materialism on their only child. She was afraid that it'd negatively impact Yuri's social skills and would be the center of bullying from other children once she enrolls into the academy. The last thing she wanted for her child was to grow up snobbish or even worse, like her father. Bunko, however, insisted that she would not become a shinobi and instead continue her father's business if he were to pass away one day.

It was a tale that Yuri never knew about until things have gotten dire. Her mother, Aiki, came from a very poor family that struggled to get by. They had no intentions of becoming ninja, so instead they had to work odd jobs to survive. Aiki, when she was 22, still lived with her parents and three older brothers that cared for each other deeply. Her mother was incredibly ill and struggled to provide for her. That was when she came across Bunko, who caught his eye immediately and had already belonged to a rich family. As a deal to help her ill mother, he wanted a relationship with the young woman. Aiki reluctantly accepted for the sake of saving her mother. She was surprised but grateful that Bunko kept his word, but things escalated when he forced her into marriage.

The rest was history and what brought Yuri into this world. Aiki realized that her daughter was slowly becoming into  her father. His mannerisms, his philosophies, motivations, they were all rubbing off on Yuri and this made Aiki fearful. If she didn't do anything, she would end up exactly like Bunko. She had to do something, and it was a drastic call. She took Yuri in the middle of the night and the two ran away from their home as far as Aiki could. No matter how loud Yuri yelled and how much she protested, Aiki dragged her out as far as she could. She wanted a better life for her daughter and wasn't going to let her be ruined by Bunko.

Aiki moved in with one of her brothers who, by convenience, was all alone. Yuri, on the other hand, was not pleased with the new lifestyle she was forced to play along with. She wanted to be surrounded with riches and expensive items. She didn't like the idea of "living like a commoner" and "being disgustingly poor". It was a turning point that made Yuri's relationship sour with Aiki and her brothers for years. Even when Yuri was being a brat, Aiki and her brother still treated her with kindness and respect. It was out of hopes that one day Yuri would turn over a new leaf and become more humble.

Sadly, that day had yet to come. A few years later, Aiki's brother had died during combat leaving her with Yuri. It took a death for her to realize what she was doing to people that were nothing caring and loving to someone as spoiled as her. It was up until that moment did she finally become more humble and understanding. It was the moment that Yuri, for the first time ever since she was a child, that she bonded with her own mother.

After a full year of her uncle's passing, Yuri had finally decided to enroll in the academy. After spending some time in the academy with a slightly new attitude, where she became kinder but still had a sharp tongue, she managed to promote to Genin. It was exciting news that her uncle would've been proud of and the same could be said about Aiki. That was when she came home to her mother on the floor with a a syringe next to her with a third of liquid inside of it. In it was poison; she tried to end herself. Yuri didn't know how long she was there, but what mattered more was whether or not she was alive or not.

Thankfully after rushing her mother to a hospital, Aiki injected weak poison that would take many hours for the lethal affects to kick in. It was a wake up call for Yuri to be there for her mother at all costs, but it also threw her into a state of depression that made her turn to liquor and smoking to cope.

After another year since the incident, Yuri had became more empathetic while keeping a sense of tough love as she juggles between the life as a ninja and the life as Aiki's daughter.

You may now claim your starting gear and work on your character sheet!
Current date/time is Tue Apr 20, 2021 8:28 am