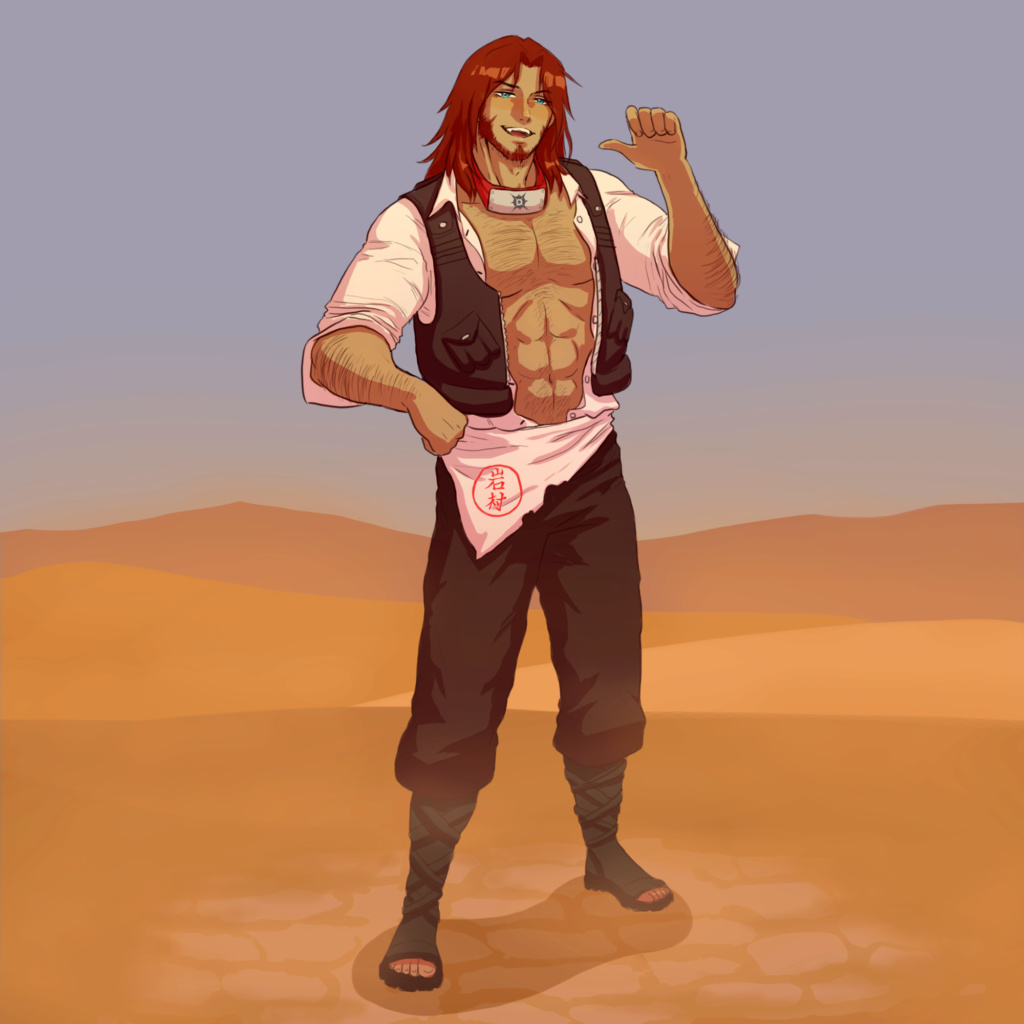 
Appearance: Gen is a broad shouldered and well built man of considerable physical prowess. He has shoulder length reddish brown hair and devilishly good looks. His piercing cerulean eyes catch more then a few glances as he walks throughout his native village. He boasts a scar down his left eye to almost his jawline. He usually has well defined five'o'clock shadow that frames his chiseled jaw line effortlessly. He has a decent amount of well groomed body hair that covers his body yet doesn't give off grizzly bear vibes. His well muscled herculean physique is complemented well by his slightly tanned olive complexion.

Personality: Genkumaru is a gregarious and kind man of seemingly infinite patience. Nothing seems to rattle him except for maliciously harming those of lower standing or power then yourself. He prides himself on his honor and manliness bound code of ethics. Everyone can be a friend until proven otherwise, and he will not tolerate betrayal. He has little practice with flirting or members of the other sex when it comes to romantic involvement and as such is quite awkward when handling those situations. He is always up for contests and will readily join any and all that he comes across regardless if he is talented enough to do it, as he simply wants the joy of at least competing and testing himself. In combat he prefers to defend others, but if pushed or needed he will go all out and be as brutally crushing as possible to end the fight as quick as possible. He absolutely loves Miso and Donburi's and can talk about them for ages; they are the perfect survival food/quick fix in his eyes.

History: Genkumaru was the last born known scion of the Iwamura clan that had fled from the Star village all those years ago, their line slowly dying off during the trek across the desert and or facing the harsh realities of the new world before them. His parents perished in a mission for the Sun village just mere months after his birth, having no other close or willing relatives he became an orphan. The circumstances of his abandonment led him to be raised in the towns orphanage and learned everything he knows from those that lived there or took care of them. This inspired and instilled in him a desire to help others as he grew up and went through the academy, always taking the new orphans or failing students under his wing to give them tutelage to better themselves and others in turn.

After he had freshly became a Genin at or around his twelfth birthday, his explosion release began to manifest which led to some pretty severe incidents of self harm or property destruction. This would lead to him becoming somewhat of a hermit just outside of the village walls but still in patrol range so as not to put himself in too much danger, but also protect everyone else. As the years went by he honed his body to be able to handle the blow back of his explosive chakra as well as to gain some semblance of control so that it didn't fire off willy nilly. He has tried his hardest to master his own body and the Kekkai Genkai that laid dormant inside him until puberty, and in doing so is relatively proficient in Taijutsu and Bakuton for the level of training/instruction he has had up to this point. During this time he would bring back ore and animals that he had inadvertently killed as to supplement his own lifestyle and donate to the orphanage that had given him so much. Feeling capable and no longer a liability he has begun to take on low level missions and make more of an appearance in the village the last few months.

You may now claim your starting gear and work on your character sheet Here
Current date/time is Mon Apr 19, 2021 2:58 am