Imino Shizuka of the Yurei Clan 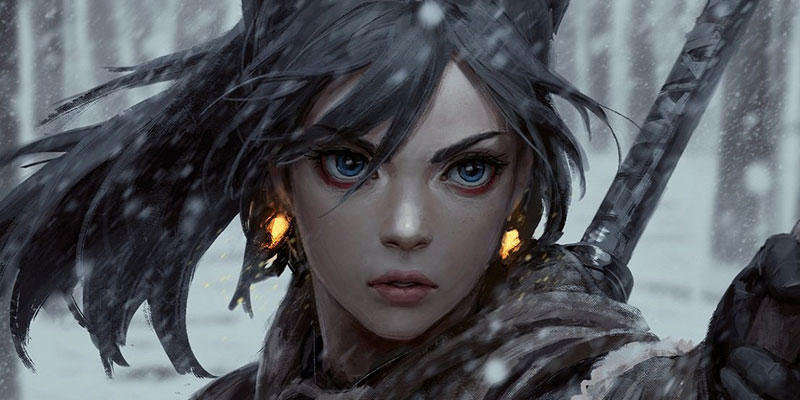 Appearance:
<p><img src="https://i.servimg.com/u/f34/16/95/39/01/wallha11.png" alt="Smiley face" style="float:left;width:240px;height:313px;">
Shizuka just like every other member of the Yurei clan has red eyes and pale skin. Her eyes are rimmed with thick eyelashes and in addition, she has a dark red shadow. Thin eyebrows arched at an angle. A slim and high nose and full red lips. Her head is topped with Long greyish black hair, kept long and mostly in a ponytail. She has a long slender neck on top of her shoulders. She has a sizeable bust on her lithe figure. She has a toned midsection that widens at her hips and curves to her flawless legs.

She has hair clips to keep the bangs away from her eyes. She dresses in all sorts of clothes from modern to traditional and sometimes dresses up to be undercover. Her choice of clothing, however, is usually the traditional colors of the Yurei clan of black, white, and red. She dons the forehead protector on wherever she feels like it at the time. From her arm on ceremonies, forehead for battle, waist during casual times, and at home when she is undercover.
</p>
Height: 171 cm
Weight: 39 kg

Personality:
Shizuka is a simple person, due to her upbringing she does not lie. This isn't to be mistaken for her inability to, for all intents she is a master at deception but when asked for her opinion she will not sugar coat it. If you ask her if a flak jacket makes them look fat, she will tell you that you make you look fat and that losing a couple of pounds would work.

She is a bit of a playful person, enjoying simple and honest pranks. She has an eerier feeling about her, a mysterious aura that often draws people into her. Much like a candy you've never seen before that your mother strictly does not want you to be looking at or even thinking about. Shizuka maybe mischievous but she isn't an evil person. She dedicates her life to the Yurei clan and works hard to keep its traditions.

Much like everyone else in her clan she has no qualms of taking a life. To them the physical body is but a vessel and medium, death has always been different for members of the Yurei clan. Though they understand the gravity of taking a life, it just doesn't bother them the same way. They embraced their stigma long ago of being witches and shamans and don't mind torturing people for information or sometimes just a little fun.

The Yurei clan have always been a group shrouded in mystery, previously a mercenary clan employed by the Sun. Their practices and traditions are unknown to the outsiders but there are a few things that have leaked into the public ear. There are 3 families within the Yurei Clan. Imino, Kurojin, and So'hei. They consider each other cousins and co-exist together. Every year they compete with one another to see which family produced the best Shinobi. However, all in all, they are very closely knit together and rule by a selection of 2 elders from each family.

Imino Shizuka of the Yurei clan was the eldest of the 5 children. From a young age, she was introduced to the ways of the Shinobi. A weapon or tool to be used for the best interest of the Yurei clan. Growing within the Yurei clan was interesting. Children lived in their own compound in a sort of boarding school. They would be trained in various things but mostly in the art of deception. Lying to one another, being able to pick out these such lies. Being part of a Shinobi meant the master of illusion, reading people, letting them believe whatever they fabricated. The children of the Yurei clan would become so proficient in it that they saw no point in lying to someone without ulterior motives beyond human needs.

Imino would train like all other children an enter the Shinobi academy a year late. By then they would naturally excel compared to normal and younger children. Outside the academy, their training would continue. When Shinobi of the Yurei clan reached age 4 they would become hosts to a former member of the Yurei clan who has passed away. A strange method of making sure knowledge was passed down. The ghost would teach them and train them in exchange for living in the mortal plains.

Imino has mostly served her Clan as a tracker, assassin and interrogation member. For the village, she mostly does tracking and undercover reconnaissance work.