The Ghost and the Flower Girl (Travel) 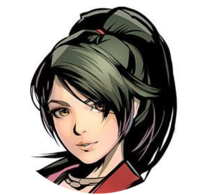 The Ghost and the Flower Girl (Travel)

Mikomi stood at the gate of the Sun Village. Waiting patiently in the shadow of the gate for her companion to arrive. She rubbed her temple. She had a headache for a few days after her spar with Shizuka. And the two hadn't really spoken since then. Waking up in the nearby infirmary had not been pleasant. She was sick of losing every fight she undertook against other shinobi. First Sojiro, then Shizuka. Though, both had resulted in both knocked the other out. Was that the only way she could actually win? That was frustrating. She adjusted the bow on her back, and shifted her channeller's katana in its sheath.

She had opted for more travel appropriate clothes this time. Wrapping herself in a large cloak that concealed her weapons and gear. She had it pulled back, to experience the cooler morning desert air. It felt chilly on her bare skin. But she knew it wouldn't last. Soon the air would be filled with the unforgiving heat of the Sun high overhead.

She had requested that Imino Shizuka be the one to accompany her into the wilds. To search for the tomb of the Executioner. A vile man who was said to have lived far in the past. Discovery of the tomb could easily lead to a great advantage for the shinobi who found it. As well as their village.

As soon as Imino Shizuka arrived, they would depart. With Mikomi not wasting much time on pleasantries or converstaion. They had a mission to do.

Re: The Ghost and the Flower Girl (Travel)

By request? That was quite interesting. Shizuka had recovered from their little spar, having used an extra layer to cover the bruise on her temple. Post recovery she had looked for the Uchiha girl, though she did not find her again. Perhaps she was on a mission, still recovering or had changed her training times. Imagine Shizuka's surprise when the two were to embark on a mission together. The Executioner's tomb had supposedly been found. Her interest was well within the realm of a legendary swordsman but from what records show his sword was massive and bulky. A blade that did not suit the likes of Imino Shizuka.

Regardless, she dressed, cool clothes underneath and a travelling cloak on top. A fine veil-like mask to protect her from the elements. She soon arrived at the gates to find Mikomi waiting for her. For now, the air was cool enough, the frigid temperatures of the night still lingering on the sands. Soon enough the sun would rise and with it a cruel heat. Together they left the village gates, travelling in the direction of the supposed location.

The Sun's heat was like a slave master, its fiery gaze radiating the flashes of heatwaves like the sting of a whip. However, these were things all Shinobi of the sun were trained for. Rationing the water, a skill developed of years of self-discipline. Travelling within the shadows of mountains and caverns whenever possible. Together they travelled in silence, only the howls of the wind and the skittering whispers of the sands to accompany them.