Kannagi Irezumi knew just where the two of them were heading. She had never met this shinobi that she was partnered with today, but she waited on the outskirts of the village ready for long distance travel with the stranger. The mission they were setting out for had attracted many bandits, thieves, jewel and glory hunters who were out for this mysterious powerful blade. Kannagi had no such desires or interests. An ancient ruins was interesting enough to visit and explore thus she was not opposed to being assigned this mission. If the village thought locating the ancient tomb in a massive ruins was going to help the village, then she would take part in full. It didn't matter that this whole trip could be a complete waste and the tomb might not even exist. Or worse, if it did exist but had been overrun by so many plants it would take years for an excavation to unearth it. Kannagi thought this might be a job best suited for a jounin team, maybe with a byakugan to look for and see living things or perhaps chakra weapons or relics if they even existed.

She sat leisurely in a chair made of paper, her own creation, with a delicate parasol above her to block out the sun from her vision. This way she would see anyone heading her way easily. Kannagi wore a long mauve skirt tied up in the front to reveal black shorts beneath. Her top was sleeveless and dark grey in color causing her bright blue hair and eyes to stand out more than usual. Her legs crossed and she wiggled her toes until her sandals fell off and she was in a more relaxed and comfortable state. This was an exploratory mission; there was no hard set goal, no cost of failure. It was merely a safe travel there and back that the kunoichi wished for. When her partner did finally appear, she would of course slide her feet back into her traveling sandals and deactivate her paper chair and umbrella with a single hand sign.

"If you're ready to go, so am I. My name is Kannagi and you're lucky to travel with me," She explained with the tone of a schoolteacher, gentle but confident, "I have traveled quite a bit so the desert should be no danger to us." After a brief conversation, which may or may not have continued along their journey, Kannagi and her partner would make it to the Barrens and its ruins. 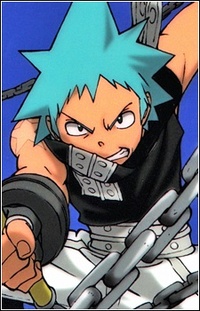 Re: To the Barrens

Rumors can spread like wildfire in the underground, one simply had to know where to look. Often times, one could dismiss them as the ramblings of the drunk in the back of the bar, the guy too deep in his cups to know the time or date. Other times, they contained a grain of truth, especially when you hear them from official sources as well.

This such rumor also had a myth and legend attached to it: the story of a mass murderer who committed atrocities using a particular blade. The man was said to be a demon clothed in human flesh, carving a blood soaked path through history until he vanished. Though this man allegedly existed hundreds of years ago, the legend and story refused to die out. His deeds lived on in infamy, sparking the hearsay and rumors circulating today, fueled by the idea that this man had been buried with his prized sword. Word had it, his tomb had been located. Someone had pieced together clues as to the general location. But walls had ears, buildings heard, and information was leaked to the general public.

Now, legends of an old tomb was normally not something official villages concerned themselves with, but people were greedy. Treasure hunters, archeologists and even some shinobi were already piling into the region in search of the tomb, all for the chance to claim what lay within. Kuroi was normally above following the rumors and the bullshit, but something about this sparked an interest in him. Treasure Hunters were bandits by another name: perhaps there was a few bounties he could collect while out there. Yea, it could be dangerous, but what collection wasnt? Plus, there was the possibility of a rare weapon, something that he would like. The young male had yet to manifest his first Soul Weapon, so if he could get his hand on something as infamous as what was supposedly buried out in that tomb, he could rely on it until he manifested a weapon. Or even, he wouldn't need to manifest a weapon at all.

It took him most of the week, but he managed to get himself appointed to one of several squads being sent to investigate the clues gathered on the tomb's location. He had no clue whom he was partnered with, save for that they would be meeting at the gates of the village.

As Black approached, the only person he could see was a woman sitting in a chair, umbrella open above her head, comfortable as can be. When she spotted him, a hand seal was flashed, and her chair folded up like it was nothing.

Was this to be his partner? Silver eyes watched the woman calmly as she gave her name. His response was simple, enough information to get things started and the duo on their way.