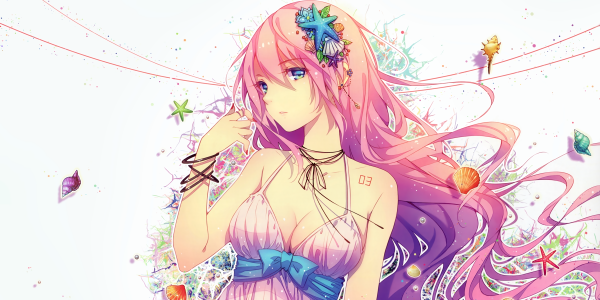 All-in-all, Ami's presence and beauty are unparalleled to any other woman. Men cannot withstand a single glance of her piercing eyes, and gentle wave of her hair. Indeed, the reaction is known to be so strong, that men, realizing that such unattainable beauty is forever out of their grasp, give up seeking partnership with others, as their hearts simply won’t do for anything else. Although she doesn't see herself as goddess level beautiful, many of the people who pursue her or flirt with her think otherwise. It is safe to say that she puts a lot of effort in how she looks and what she wears though, feeling that a girl at least can't be lazy with their appearance. She came to understand this after graduating from the academy, when she started paying more attention to the way of dress.

Ami has long lime green hair which flows down to her waist. She wasn’t born with this color hair though. Like a normal child from the Hyuga clan, she had black hair when she was young but she didn’t like it at all. Her want for something exotic made her change her hair color as a teenager, bleaching and dyeing her hair lime green as a representation of her love for freedom and creativity. Her hair is her life, not letting even her friends touch it. In the morning she would spend an hour styling it to the way she wanted. Never will you see her hair in disarray. There was nothing that could come between her and her obsession with making it ‘perfect’.

Her eyes are the white, lavender white color that is the symbol of her clan. You could tell she was part a Hyuuga just by looking at her eyes. She loves being different so she doesn’t mind this, but she does wear eye contacts sometimes to create a different image for herself, opting now for a gold color. She has twenty-twenty vision, a keen eye for everything. They are big and quite charismatic, if you look into them long enough. Ami thinks that the most beautiful part of her face is her eyes. Her face is pointed and small, like a lady, as she would say.

Since becoming a shinobi, she had made many friends and enemies. After the departure of one of her best friends and many near death experiences, she began to doubt herself as a Hyuuga. In the process, she started to hate her appearance. The lavender white eyes she had once been so proud of were now more of a nuisance for her. As a result she decided to change her appearance, starting from her green hair. Now she has light pink hair and insists on wearing light blue contacts. Not only did she not want to give away her bloodline so easily, she wanted to achieve certain goals in her life, prove her worth once and for all to her clan before she could show her clan distinct features proudly again. When she wears these contacts, she must take them off to activate the Byakugan.

She wears some form of dress when she goes on missions and does training, opting for comfort more than fashion. She has quite a muscular build for a woman, thanks to her ongoing Taijutsu training. Her favorite colors are black, red or green and her attire usually is one of those colors. At any formal event she will wear a kimono, a strict rule imposed by her clan. As a potential heir of the main branch, she watches her attire and appearance carefully, though the green hair is disapproved by the rest of her family. Her need to be different yet to fit in clash with each other, shown in her appearance.

Ami is a very outgoing person, always wanting to make a lot of friends. She loves talking a little too much and finds she often scares away new people because of this. But she means no harm. On the contrary, she is very loyal and protective of her friends. Since she most likely considers everyone to be her friend this can be a problem but she feels its her duty to protect anyone she values. A genuinely good person, she hates betrayal and will not take any excuses.

As a shinobi, she's very diligent and works hard. She is always out to prove herself to her village and her clan. Ami hates being looked down on so she tries to outperform people. But this doesn't make her snobby though. She loves training with others and will humbly take the advice of people stronger and/or older. It is her dream to one day become the Kage of her village, to show everyone of her capabilities.

Her favorite past time is eating. She loves it more than even training, stopping at random times to eat. Her metabolism is shocking and she has to carry food with her everywhere she goes. Her favorite foods are spicy and sweets. She can't cook though, unfortunate for someone who enjoys food as much as she does. Ami is often seen giving others food too. She enjoys watching people eat as much as eating herself.

The story of Hyuuga Ami as a child is not very exciting. She was born to the main branch Hyuuga Clan, in the Hyuuga manor to two loving and wonderful shinobi as their first daughter. Her mother was a medical nin and her father a Tokubetsu Jonin, having his own Genin team. She was surrounded by the shinobi world even before she was born, with high expectations and responsibilities. Under a lot of pressure, she would grow. Her parents often taught her a lot about the village and the history of her clan when she was a mere child, placing the burden of their philosophies on her. Such was the life of a main branch descendant, she supposed.

She entered the academy when she was ten, a little later than the other children of her clan. Because she was smart and picked up things quickly, her academy life went by quite quickly. She made lots of friends and learned many things, under the careful guidance of her teachers and her parents. Ami grew to dislike fighting, dislike the idea that people had to fight each other simply to prove their worth. She found it extremely disturbing about the Hyuuga high and low born. She dreams of one day bringing the clan back as one, creating unity so that together both main and branch family members could pledge their loyalty and allegiance to the village.

Now as a Genin, Ami spends all her time training or taking on missions for the village. This is not only for the family pride, but also her own ambitions. Her hopes to one day serve as the Kage of the village, to be a leader. As a Hyuuga she hopes to use her abilities and accomplishments to help bring her family together. Although stressful, she understands that it what she has to do, as there are no others capable of doing so. She wants to show the world what she is capable of and honor the family name.

You may now claim your starting gear and work on your character sheet!
Current date/time is Tue Mar 02, 2021 3:08 am