Mission Info.:
Name: Patrol the Village
Rank: C-Rank
Participants: Moon Village, Sun Village
Type: Solo Mission
Reward: 20 EXP
Location: Within a village
Details: There is always something going on in the village. Low level criminals, basic thieves, or natural disasters like fires can pop up at any moment. Patrolling the village is the duty of all shinobi, and you must make sure all is well in the village. Patrolling consist of walking the streets, watching over business, looking into rumors, and just keeping an over all eye on things.
Requirements: Your post must be at least 600 words. 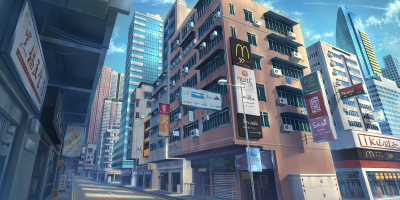 The Hyuuga walked out of the Hyuuga compounds and onto the main streets of the village, her eyes alert at all the activity. The streets were bustling with vendors and restaurants. She was going on a mission today, alone. This was her first ever mission and although excited she was also a little nervous. She had been a Genin for quite awhile now, but never once had she done a mission, much less one by herself. The girl walked to the business district side of the village, looking around. She hoped that it would be at least a peaceful day, going over all the possible situations that could possibly go wrong in her head.

She smiled at the restaurant owners, which mostly consisted of many small businesses like coffee shops and ramen shops since there were a lot of offices in the district. The small business owners were always happy when they saw shinobi patrolling the streets, trying to keep them safe and free from crime. But unfortunately crime always found its way in the area, including things like thieves to arson. The girl was happy to have something to do at least since she was starting to get very bored just training all day.
The girl kept walking, looking around. To be honest she wasn’t really sure what to do other than walk and she was also slightly afraid of not being able to help in case something did go wrong. This was her first mission, after all. The Hyuuga walked up to one particular ramen shop, where the owner was setting up to start his day. She had forgotten how early shop owners had to actually prepare in the morning before they opened up for business. The elder man in his white uniform would stop what he was doing and greet her warmly.

“So it’s you here helping us today? Never seen you here before.” It was true, she rarely came to these parts. This was one of the reasons why she chose this mission, doing a little bit of exploring unknown places and doing a mission together. Killing two birds with one stone, some would say. She beamed at the old man. It was always nice to feel welcome.“Yes, I’m Ami Hyuuga.” She said simply. The kunoichi would move on, going from restaurant to restaurant, greeting the owners and staff. She wanted to make a good impression as impressions were very important for shinobi. The morning was a little cloudy, the perfect weather for her since she was not a big fan of the sun. There was also a light breeze which helped cool down the area from the unforgiving summer heat.

It would be noon before there was any sort of action, for her anyway. The shop owners set up their lunch services and she could see the streets begin to bustle with activity. She kept a keen eye as she walked along, going in circles. It was good exercise, she thought, since she hardly ever moved unless training if at the Hyuuga compounds. Ami was still walking to streets when she would hear a cry, a cry that was so shrill that it almost made her jump. A woman’s scream, she thought instantly, trying to search for its origin.

Ami dashed down the street and turned abruptly around a corner, almost colliding with a man coming from the opposite direction. She caught herself just in time, her reflexes better thanks to her training. The young woman saw the man scramble to his feet and dash around the same corner she had come from, a bag in his hand. “That’s mine! Stop, you thief!” A woman came rushing, hollering after the man. Without second thought, the kunoichi went after the man, calling behind her shoulder. “I’ll catch him, you stay there ma’am!” The last thing she needed as a civilian to get themselves injured while doing a job meant for the patrol guard.

The Hyuuga dashed after the man, picking up speed as she tore through the streets, hot on his tail. She disliked thieves with a passion and never could understand why someone would stoop to such low levels just to get money. It would be an extended chase of cat ana mouse, with the thief looking behind his shoulder every now and then to see if she was still in pursuit. Ami drew her blade, her eyes locked on the man. She was going to wait for the man to exhaust himself, knowing that she could outrun him. The girl would close the distance between them and she would turn sharply onto a side street.

Her plan was to appear in front of him, stopping him in his tracks. It was a good thing that he wasn’t a shinobi, his reflexes not as good as hers. He stumbled and fell to the ground, the bag flying out of his hand. This was going to be easier than she expected. Ami would quickly pick the bag off the ground, her katana pointed at the thief as she said softly. “Don’t move!” the girl wasn’t going to actually use violence against him, as she never used violence against a civilian. But he did steal and she was going to have to report him to the local authorities. The thief looked into her lavender-white colored eyes and that must have scared him enough for him to freeze.

She would retract her katana and pick him off the ground, holding both of his hands behind his back. Her grip was firm as she pushed him along the street, tightening her grip as they went, in case he was to escape. It was good that he didn’t struggle as they moved to the authorities. Even though she hadn’t done much except walk and run, it was tiring. The woman would continue to patrol the streets until sun down, greeting the owners a last time before she was going to call it a day. She came to enjoy village patrolling, as mundane as it seemed. It was definitely good exercise. She would finish up her mission swiftly, glad that there was nothing else bad that happened while she was patrolling. Ami felt good, to have complete her first mission, hoping to do some more if she had the time.