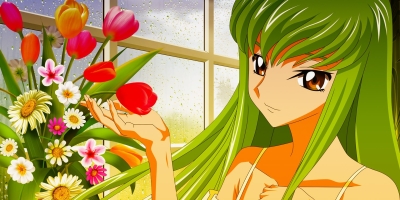 She studied the fox. It seemed to have strong muscular legs, which meant that it probably was quite quick in terms of moving. She wondered what was the best approach, as the young girl saw Karite touch her tanto. Her face had turned somewhat emotionless which surprised Ami, as she heard her mentioning about turning the fox's bones into senbon. It was such an abrupt change in tone that it made her uneasy, but she focused her attention back on the animal, which was still poised to strike. She figured it was better to make the first move than to wait on the animal.

So she ran towards the fox, activating her Byakugan as she did so. She didn't know if it made much of a difference when facing an animal rather than a human but she wanted to see if she could see the chakra points of the fox, to make sure her attacks would hit the right spots. The girl's vision changed, the usual colours of the world turning black and grey with the exception of the blue chakra paths. She would picot to the left and pulled out a kunai from her pocket, ready to strike at the fox's side.

Karite saw Ami run towards the fox. She was concerned for her safety but knew that she would be okay. Her hand was steady on her tanto as she prepared to follow up behind Ami. "You got this, Ami." She said quietly as she saw Ami just about at the fox. She took off running forward, knowing that she would catch the fox with her tanto if it tried to dodge Ami's attack. She drew her tanto as Ami pivoted to her left. As Ami went to strike at the fox with her kunai, Karite would be ready to strike, her tanto held in her right hand with the blade facing into the fox. She gripped the edge of the handle with her left hand as she braced for full stop to be ready.

She jumped up about 3 meters, her kunai poised horizontally as she closed in on the fox. She extended her hand out to strike but the fox ran to her left. Its movements quick, it would circle behind her and bite at her left leg as she came crashing down. The girl came down on her right knee and looked at Karite, hoping she would strike next. She hadn't expected the fox to just stand there for her to strike but the sudden movement hand caught her off guard. She chided herself for going for such an up close attack.

Her right hand fingered her weapon pouch, withdrawing three senbon. If Karite attacked and it managed to get away, she would try to pin it with her needles. She watched as the fox turned its attention to Karite. Ami was still feeling slightly bad for wanting to kill the fox although it had bitten her. She wanted little wild animals to live and hated killing them even if they attacked. The girl would watch as she knelt on the ground, her leg with bloodied biting marks on it.

Karite watched as the fox made its move to attack Ami. She was hopeful that Ami's attack would work. When it didn't, the fox was able to bite Ami in her left leg. Karite saw the bite and instantly became cold and numb. This was her friend. This was someone she trusted and cared about. As the fox turned on her, she lowly looked towards it. Her emotionless expression turned slowly to cold malice. She watched her friend get hurt. Now she was going to end this. She began to chant a prayer. "Mighty Goddess of Balance. Mother of us necromancers. May your strength fill me as I send this being into the grips of death. May it serve the balance and the cycle through my actions." She watched the fox in what seemed to be slow motion as the adrenaline and anger filled her. As the fox got close, she swung her tanto. She ended up stabbing the fox directly in the neck, ending its life. She had however, swung her left arm up to keep the mouth away from her chest. By doing this, it had been able to attempt a bite in her arm. However, due to the thickness of the cloak and the stabbing, it was not able to put enough pressure to damage. Her adrenaline had warn off by that point. Her friendlier face was back as she panted softly. "Are you alright?" She looked to Ami and her leg.

The look of cold malice Karite gave the fox would send chills down Ami's spine. The abrupt change in facial expression and tome caught her off guard. Although she knew Karite was probably only angry at the fox for injuring her, she couldn't help but feel a little terrified at her friend. She watched as Karite mumbled something like a prayer and then slashed out at the animal ruthlessly. In an instant the fox was no more...It all happened too quickly that Ami took a moment to process the events, all the while looking at the bloodied body of the fox lying lifeless on the ground.

"I'm okay." Her voice was coarse as she replied to Karite. She noticed the girl's expression soften and gave a weak smile in response. Ami looked around their surroundings and then up at the sky. It was getting late and they had been out patrolling the entire day. She guessed they'd completed their mission. The Hyuuga would stand up slowly, limping on one leg as they both made their way out of the jungle. "We did it, Karite!" Ami's smile widened.

"Thanks for all the help! I had a lot of fun today and let's do this again some other time!" She was tired, and couldn't wait to get back to the Hyuuga compounds.