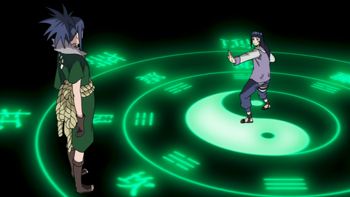 Name: Gentle Fist: Eight Trigrams Thirty-Two Palms
Specialty: KKG
Rank: B-Rank
Element: N/A
Cost: 10CP 15SP
Range: Contact
Duration: 1 Post
Description:
The Eight Trigrams Thirty-Two Palms is a maneuver of the Gentle Fist fighting style. It is essentially a halved version of the Eight Trigrams Sixty-Four Palms, but seems to be no less effective. This technique is used to close off the flow of chakra through thirty-two chakra points of an opponent's chakra pathway system. The user will attempt to deliver thirty two quick jabs, that ultimately are aimed at stunning an enemies chakra system. While these individual jabs do not do very much damage, they are able to completely render an opponent useless for a short time. If the first of the thirty two jabs lands, then all thirty two will land, all using the same single action. When this attack lands, the enemy will have their chakra pool stunned for the next turn, preventing them from using any technique, jutsu or attack that requires a chakra cost. Their MPP will also be reduced by 2 for the next post.

If this technique lands, the user may use Gentle Fist: Eight Trigrams Sixty Four Palms directly after it without needing or consuming an action. They still must pay the resource cost for activating the next phase, but can do it without using an action.