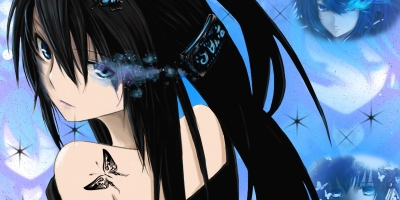 The most defining feature of Kokoro is her aquatic blue eyes. Her hair is black and always tied in two ponytails. She is quite short and slender, and ghostly pale skin. She has a small black butterfly on the back of her left shoulder. It's believed to be a birthmark passed down from her mother. At first glance, she looks nothing like the others of her bloodline with the exception of the black lines under her eyes.

Her clothing style is quite…exotic. She wears very little clothing, throwing on a long black cloak over her undergarments, possibly from laziness. When she does try to wear something decent, the girl chooses black outfits, either a short dress or tank top and shorts. Not much of a fashion guru and an essential colour hater, there is nothing but black in her wardrobe.

She also has her weapon pouch always strapped to one of her knees and a weapon such as a katana always strapped around her waist. She very rarely wears the regular sandals that other shinobi wear as she likes wearing black high heeled boots to match her black outfits. it also helps her make up for her lacking height, something she has struggled with since she was a child. Kokoro also sometimes wears silver dice-shaped earrings. Not keen on jewelry, she rarely wears bracelets nor necklaces.

Crude is probably the simplest way to describe Kokoro. She looks very innocent and childish but nothing about her actual personality reflected her appearance. She is cold and quiet, content with being alone. She loves causing trouble and fighting, loving blood anything in the world. She doesn’t kill innocent people though, only people who wrong her or pick on her. She believes in justice by her own means and won’t let anyone or anything sway her of the belief.

Through her teenage years, she began to find the joys of healing people only to fight them, aspiring to be a medic and a fighter at the same time. She is stubborn and slightly insane, as people get pretty scared just by looking at her. Kokoro is a night owl, not a fan of sunlight. She prefers sleeping or training during the day and roam the streets at night.

She loves eating but ironically enough, not sweets. Her favourite snacks are rice crackers. She hates sweets primarily because she thinks all girls like them and she doesn't want to be like the rest. She can eat around six to eight times a day and struggles to function when she can't. She also likes exercising to burn off the fat from food, which explains her lean figure, doing some form of exercise like running or training during the night.

History:
Her past is quite a blur to her. Kokoro was never valued nor loved by her father because she was a girl and girls were not seen to have much value. Her only recollection was that she was born to a demon of a father and a coward of a mother. Her father was a tyrant and believed in absolute bloodshed, which would explain why he even killed his own wife. She remembered the night when it all happened, when she was only seven, when she came home from wandering the streets to find her mother dead on the floor with her father just standing over her body, watching. There was no explanation and no conversation but the image stuck with her for the rest of her life.

And then he would leave her, stranded in the middle of nowhere, wandering. Eventually she would pass out from starvation, and she would be rescued by a Jounin from the Sun Village, Sakuragi Ren. He nursed her back to health and offered her a place to stay. Although thankful, she couldn't build a close relationship with him and ended up spending a lot of her time on the streets picking fights. But Ren would take care of her as best as he could and even enrolled her in the academy, hoping that she could turn her extreme personality around through becoming a shinobi.

She was a horrible student, not a fan of reading and studying. But she excelled in training and sparring. The girl found herself being a Genin at the age of fourteen and since then she has been trying to find herself, in some way. The only thing she knew tying her to her father was the her bloodline, but she hates admitting it to outsiders, thinking it as a curse more than a blessing. To this day she goes places alone, and has no friends. Her ambitions to be a good fighter lives in her heart and she hopes to one day kill her father for the hell he made her go through.