Mission Info:
Name: Patrol the Village
Rank: C-Rank
Participants: Moon Village, Sun Village
Type: Solo Mission
Reward: 20 EXP
Location: Within a village
Details: There is always something going on in the village. Low level criminals, basic thieves, or natural disasters like fires can pop up at any moment. Patrolling the village is the duty of all shinobi, and you must make sure all is well in the village. Patrolling consist of walking the streets, watching over business, looking into rumors, and just keeping an over all eye on things.
Requirements: Your post must be at least 600 words. 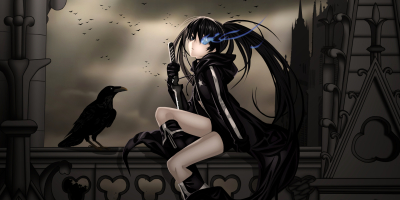 "We have another shinobi stationed for patrol today." He began rather apologetically. By now almost the entire village knew that she was no a people person. He looked at her with eyes which screamed innocence and sincerity as he continued, " Unless you want to patrol together...?" She threw up a hand to indicate an automatic negative. She was not going to do any sort of thing. "How about you tell me, what are my other options?" She whispered to the guard. She was not blaming the poor guy for doing his job and was actually appreciative that he had let her know of this change before the other person arrived. "Well, we're missing someone for night patrol." He suggested enthusiastically.

Kokoro clicked her tongue, nodded her head and told the guard she would return before sunset. With that, she would roam the streets aimlessly. She was already out and really disliked having to go home first only to come back out again. She would sit at a cafe, toying with her heavily dilited coffee for hours on end, praying time to go by faster. Kokoro preferred night patrol, as a night owl, but she had woken up extra early this morning for patrol duty. The long hours til sunset seemed to drag on, as she watched people going to and from the busy streets. How she wished she had somewhere to go too, instead of having to wait for hours on end. As the sun finally started to go down, the girl would make her way back to the village gates. The guard from before had gone home probably, as she now saw a different face in his place. "Sakuragi Kokoro. I'm on patrol duty tonight." The guard nodded his head as she continued. "Any reports of thefts or arson lately?" She would start with the places prone to crime.

"We've seen some complaints from the business districts..." he pondered and was about to continue his sentence when she interrupted, "Got it, business districts." Kokoro turned to leave, heading directly there, not giving the guard another chance to speak. She just wanted to hurry up and finish the mission. She cared less where she patroled. The black haired girl turned onto a side street and then headed to the center of the village. She could see that most of the office buildings were now dark with the occasional light coming from the overtime employees trying to display that they were hardworking or hardly working. Continuing down the street, she was on the lookout for any troublemakers, secretly hoping she'd not encounter any. She wasn't in the mood for fighting.

Kokoro spent the next few hours walking rather aimlessly down the now deserted streets. Even the usual druggies were nowhere in sight. She guessed she was lucky today, slight compensation for having to wait. And then hunger would suddenly hit her like a rock against her stomach. She hadn't eaten all day though she'd been out. Priorities of food and water were taking a backseat for the kunoichi nowadays. The girl concentrated on patrolling though, choosing to deliberately ignore her stomach's endless cries for attention. She'd finish the mission, with nothing more than occasional wanderer or drunk sleeping in alleyways. Today turned out to be easy, she mused, wondering if it had been equally as easy for whoever took the day patrol. Whichever, the girl made sure there were no signs of suspicious activity before retiring for the rest of the night. It was just after midnight as she walked down the main business district streets.