People from all over the world flock to the Kellen mountain range, from Researchers hoping to spot the massive beast, to Shinobi being recruited to help contain it! After months of tracking a massive creature in the north, scientist have finally located a cave that is believed to be the resting place of the mystical beast. You, along with several other ninja, head north, now apart of a unit created specifically to contain and capture the Froskerin! You have been enlisted by Professor Nambi, a scientist and naturalist who has spent his life researching the ten legendary beast, and is excited to finally meet one in person!

The bijuu has been found, located in a ice cavern high in the mountains. The cavern itself is in a small valley at the base of a massive set of mountains, and is self contained by the forest and rocky walls. This is where you will battle the beast, using its own hideout as its crutch. The plan, on paper, is simple, but will be extremely difficult in application, and that is where you come in. Highly skilled shinobi are being formed into teams, tasked with containing, battling and then capturing the creature. 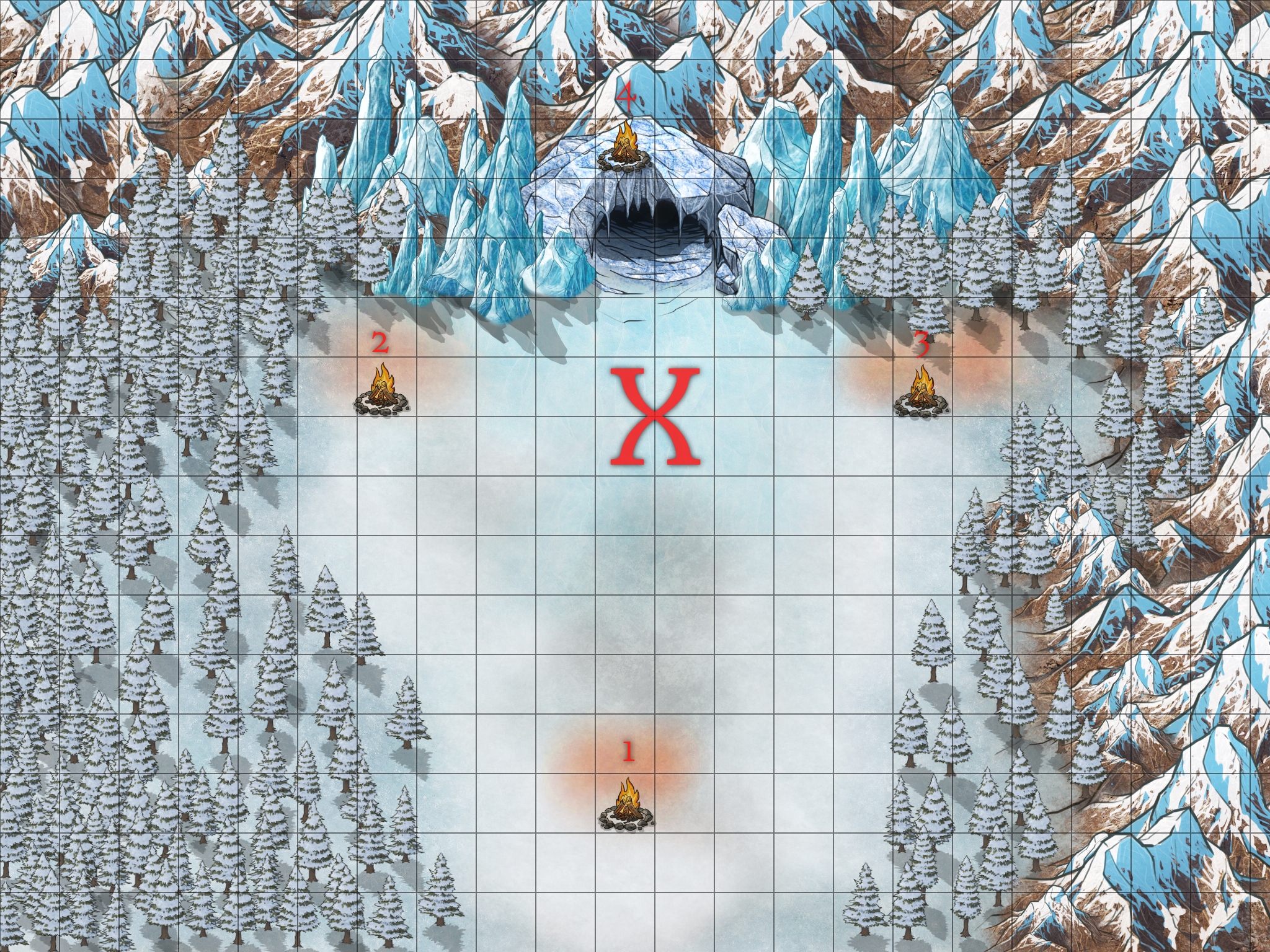 Each square is 5 meters
Four camps have been set up within the valley where the Bijuu has been located. These camps are crucial to the operation, and without them the entire thing will fail. Each camp has its own job, and whoever is stationed at a specific camp will be required to assist in that job so that the overall operation can succeed. Each camp site is equipped with a special campfire, this fire will provide enough heat to those near it to keep them warm and protected from the cold of both the environment and the creature itself. Anyone who is within 5 meters of one of these fires will be protected from the cold and frost effects of the creatures natural Below Zero passive. However these flames will not protect you from any of its other deadly attacks. The heat of each campfire only radiates 5 meters from the fire, creating a 10 meter diameter sphere. If you leave this zone you instantly begin to feel the effects of the cold and frost.

You and your teammate must choose which camp you wish to be stationed, this will determine which topic you are apart of and which job you are required to do for the duration of the event. You may leave your campsite and traverse the battlefield in anyway you wish, however the success of the event depends on the success of each campsite.

The Red X:
The red X marked on the map above is the target, it is where the bijuu is needed to be before the next phase of the attack can take place. The battle can only begin once the bijuu is on the X, however during the battle it may move around in an attempt to attack or even destroy those involved.

Campsite 1:
Camp one is the long range isolation and defense team. You will be positioned at the mouth of the valley, the only way in or out. Your job is two fold, first is to obtain the creatures attention, draw it out of its cave and kept its focus. Secondly you are to ensure the bijuu does not escape, acting as the primary line of defense for the valley.
Camp 1 is 25 meters from the red X

Campsite 2 and 3:
Campsites 2 and 3 are the assault teams, and are the primary offensive teams for taking down the bijuu once it has moved onto the mark. These teams are charged with dealing as much damage and combating the bijuu as quickly as they can, and will be the front lines when it comes to taking it down.
Camp 2 and 3 are 15 meters from the red X

Campsite 4:
Campsite 4 is the containment and blockade team. This camp will be stationed 40 meters in the air, atop the rim of the cavern. Once the bijuu has left its cave, this team will be tasked with collapsing the cave behind it, then barraging the beast from behind. If the cave is left open, the beast might try to retreat back inside, making the task almost impossible.
Camp 4 is 40 meters in the air but 15 meters from the red X

The bijuu will continue to fight until it is either defeated or manages to escape the valley. While in battle, the creatures passive will constantly be in effect. In order to avoid the effects, you must stand within the range of the campfires.

-This is a timed event! If it is your turn to post, you have 24 hours to reply from the moment the last post was made. If you do not post within the 24 hours, you will be skipped. You will not be knocked out of the event, but will lose your turn.

- Both you and your teammate must begin at the same camp and post in that camps topic.

- There is a chance the bijuu gets away, if the event is not completed it will flee and go back into the reward pool.

- This is a non death topic, you can not be killed during this event. You must make at least one post in the event in order to claim the participation reward.

- You do not need fuinjutsu or sealing to have the bijuu contained within you. It will be done for you by an npc.

- The ice and frost effects of the bijuu are considered to be stronger than normal chakra, and thus over power ice immunity or resistance effects.

- your chakra/stamina, and any other resources will carry from topic to topic. This event takes place in one moment, and so everything will carry over regardless of how many topics you move through.
Current date/time is Mon Jan 25, 2021 9:51 pm