Further into the darkness we go. (Clash)

Further into the darkness we go. (Clash)

Mission Info:
Name: High value target (Solo)
Rank: -
Participants: Moon Village, Sun Village, Missing Ninja
Type: Solo Clash
Reward:
Details: This clash involves two sides fighting over a high valued individual, be it an animal, or even another person. On one side, the defender is attempting to protect the individual from harm, while the other side is trying to eliminate the target. The defender must protect the individual, ensuring that no harm comes to them until back up can arrive, in which the clash is over. The attackers are trying to kill the target, ending their life. The high profile target is controlled by the defender, has MPP stats equal to a C rank and can not fight what so ever, having no combat qualities at all.
Requirements: The defender must make the first post, detailing the environment. They then have 30 post to protect their targets life. If they manage to keep the target alive the clash ends and they win. The attacker is attempting to kill the target within the 30 post limit. They win if they manage to knock out or kill their enemy or the individual they are protecting. The target can not fight back. In this case the high value target is the other opponent.

Gen wasn't himself anymore and hadn't been for a good moment. The anger and violence brewing inside him was dangerous and explosive. He was the living embodiment of his KKG and was relishing in it at the moment. He had arrived at the Champion's isle several weeks prior and had begun embroiling himself in the underground fighting arena, taking fights in the blood arena as it was called. It was a place where all jutsu was forbidden and halted through the use of unique fuuinjutsu seals. It meant that anything that manipulated chakra within ones system was negated. This was the foundation on its rules, as everything after that was permitted. It was a dark and honor less place full of cage fighters and death. Gen had won several fights already as he threw himself into the fold of this world completely, running from the life he had to simply be what they had taken to calling him, Akaoni - the red horned demon.

His clothing was tattered and unkempt, his hair and facial hair unkempt and over grown, its crimson locks cascading around his face. He had forgotten himself as he went from one fight to the next with barely a moment to recover or eat. His body emblazoned with bruises and scars now, as he clearly took as much as he gave to others. A fierceness in his eyes that was bestial and would have made his adoptive brother proud. He had no care for what harm he did to others int his place as they were all criminals and scum, people who he could fully unleash on and punish, channeling his undying fury for a s long as he wanted or still breathed. Genkumaru would seem all but lost to those that knew him before in his current state.

The underground arena was lit every ten feet by torches and revealed a large amphitheater room with a ten meter diameter octagon in the center. Seedy men and women from all over the world had gathered around the arena to place bets and watch the blood sport going on. Each death or knock out, or gruesome dismemberment met with glee and cheers! Drugs, alcohol, prostitutes you name it, could all be found being indulged on in this shadow arena. The glorious honor bound tournament grounds above would seem like a distant fairy tale to anyhow who laid eyes or feet upon the grounds of the Blood Arena! It was here that Gen waited along the rows of benches flanking the backside of the amphitheater, with all of the other competitors waiting to get there turn in the octagon. He had a tattered hoodie with the sleeves torn off that had the hood drawn over his face, further obfuscating him from any who may know him from his previous life. 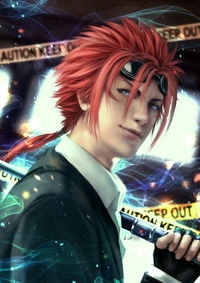 Re: Further into the darkness we go. (Clash)

This was the side of the world that Rin didn’t expect to witness back in his Academy days. The underground fights were brutal in almost every aspect, and not an ounce of chakra are allowed to be used. It was just pure physical fights, leaving only the strong and technical skilled in taijutsu or bukijutsu to emerge victorious. Fortunately for the red head genin, he’s at least familiar with close quarters combat. Still, whether it was the fame or the glory of fighting in a dangerous situation, Rin wasn’t sure exactly what really drove him here. All for one certainty is that Rin finds this experience will be more beneficial in the long run.

What the boy wasn’t enjoying is that from the looks of things. The man with tattered clothing exerts an experienced warrior in both power and skill. Frankly Rin was seated at one of these benches flanking the arena. Whether fate decides that he joins in this fight against this man. That piece remains unknown to young Rin, and with everyone else tittering over with excitement. It seemed to linger in the air as there were signs of people who were doing the typical drugs, gambling, etc.

Garbed in a dark green flak jacket that is lightly padded as it covers his waist, chest, shoulders, neck, and back. The moon insignia could be seen on Rin’s back albeit he’s facing in front of everyone. Because he’s sitting down, normally Rin’s katana would be located at his hip attached to the belt. However the sheathed weapon can be found held in his left hand. Located within the pockets of his vest is a kunai with some basic wires. As he will never know when the katana is no longer an option to use, so having a backup option was always nice. Otherwise the teen is wearing black slacks with a pair of dark brown sandals. A belt with a silver buckle can be seen around his hip just below the jacket.

Re: Further into the darkness we go. (Clash)

It was a night just like any other here, Gen would be called by the name they gave him Akaoni and he would enter the ring, he would fight some criminal scum, and he would break them. Then he would sit and it would happen again and again until the night was over, sometimes he lost, but no one was as ferocious as he was and he could take a beating thanks to the training with his brother Sojiro. The thought of him making him wince, it wasn't time to go home yet, he needed to do more good by damaging these scum beyond repair so they couldn't harm anyone else again.

Gen had reconciled the destruction he was causing by viewing himself as an angel of salvation in the dark here, protecting future innocents from the criminal scum that inhabited this arena. He was simply performing civil service. His fists may have taken lives already, and maybe they lived, but he knew they would never fight again, at least as easily before. His entire goal was to cause fear in the heart of the men he fought here and make them revisit their life choices.  He was Judge, Jury, and Executioner and this was his court room as of late. He kept promising himself he would go back soon, and he just needed one more fight, one more night of rehabilitating the scum of the world.

When his name was called, he rose from the benches and listened to the pigs and human trash call out the name they had given him, AKAONI! It was Obnoxious and against his own wishes, but it didn't matter, he wasn't here to have an opinion. Walking into the octagon he would await his opponent to be named, taking on a mixture of a boxing and karate stance. He would be primed and ready for whomever was chosen to fight him this night.