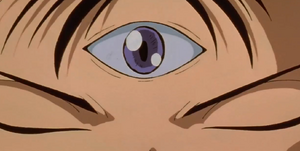 Located on ones forehead, centered perfectly between their two eyes, the Jegan'ai is a third eye that typically remains shut unless actively in use. The size of the jagan eye itself is only slightly larger than the two main eyes and possess no eyelashes like regular eyes do. The iris and pupil are thinner than a regular eyes giving it more of a feral or feline appearance to it. Regardless of the color of the character's normal eyes are, the Jagan is always violet or almost like amethysts glittering in the light.

The Sixth Sense/Mind's Eye ~ This ability is only active when one activates the doujutsu. Upon activation the third eye opens and allows the use of the sixth sense. Whether one has use of both their regular eyes or chooses to close them, the user is able to see in similar fashion that a bat would use echolocation to navigate in the darkness or in situations where the regular eyes are impaired. However, except using sound, the Jegan'ai uses its ability to see chakra to map out an area with the radius varying on the users mastery of the eye. This is made possible by the Jegan'ai constantly pulsing chakra from it, something only visible to those who can see chakra (sharingan, byakugan, ect.), and like how sound bounces off objects to help a bat navigate in the darkness the same is done for the Jegan'ai except with chakra. Even if covered by a headband or cloth, the Jegan'ai is able to use its special ability making it easier to hid one's possession of the eye and more importantly when they are using it.

In-depth Explanation:
The function of the eye itself serves as an accurate sensory ability that focuses solely on chakra. This means that anything within a certain range can be sensed so long as it possesses chakra be it nature or man to chakra based weapons or jutsu. The pulsing comes in almost like how a ripple flows in water from an object being dropped in it, though the ripple continues to come from the eye constantly. If said ripple comes in contact with anything chakra based then said item, person, or thing sends back a counter ripple that the eye immediately picks up on. This creates almost a complete mapping of the immediate area to an acute level of precision as the ripple flows out in a 360° radius and is unhindered by anything lacking chakra.

The accuracy in regards to how well one can identify what is being sensed is based on two factors: how far one is from the user and how adept one is with the Jegan'ai. It should be noted that the Jegan'ai itself does not view the world like regular eyes whatsoever. Instead only seeing what is reflected by by the chakra pulse generated after activation. So one could not see anything beyond what the eyes allow if the two main eyes are closed or impaired, limiting ones vision to te extent that they train their Jegan'ai's range.

Advanced Chakra Manipulation (Fluid-Like Chakra) ~ The secondary ability of those who possess the Jegan'ai is their innate ability to manipulate the chakra within themselves to an incredible degree. The concept itself is that one uses chakra like water within the body, from this they are able to perform feats that would normally be physically impossible. Imagine a cup that is almost filled with water, normally only an outside force would be able to move said cup. The water within, as a result, can also only be moved if the cup is moved by an outside force. Now consider if the water within the cup could move from within the cup, naturally with enough force the cup could the be moved from in internal force; the internal force being the water. The fluid chakra manipulation follows this concept treating chakra in the body like water in a cup. This allows for one to perform feats like dodging in mid-air or landing physical attacks with increased force (these being actual jutsu and not passive abilities).

Weakness:
To start if there is no chakra present in a target or hidden, the Jegan'ai will not pick up on it; viewing the object as nothing more the a dark spot among other s
chakra based entities or items.

While still usable in fog , if it is chakra related fog or mist then it makes using the eye more difficult to notice smaller chakra signatures. Those from a body or large jutsu could still be noticed, albeit, only within 1/3 of the users natural range and if its too small like that of a chakra infused kunai or smaller it will go unseen in general due to the chakra of the fog or mist. This can even include flashing lights, however, only if it comes from a chakra based source as natural bright lights will not effect the effectiveness of the Jegan'ai.

Lastly, due to the bloodlines ability to use non-elemental chakra in an advanced fashion it is treated as an element. While not having any strengths it does not possess any weakness unless it is against abilities or jutsu that specifically target ones natural chakra (gentle fist or chakra absorption). Due to this the bloodline actually loses a slot for elements thus reducing the max amount of elements one can have by 1.

Last edited by Anubis on Thu Jul 23, 2020 8:48 pm; edited 1 time in total
The author of this message was banned from the forum - See the message
Sojiro Sakura

Alright, everything here looks mostly alright! I'm gonna have to ask that you take all instances of percentages/fractions and turn them into hard numbers

Please and thank you.

Ok, but before I do so let me explain. The reason I didn't put a hard number on it is because the range one is able to use the eye varies on how much they actually train the eye. So putting a hard number wouldn't make sense if one person's range is higher or lower than another's. It definitely could and likely will get confusing as 75% of say 10m is not the same as 75% of 20. I can put hard numbers if it's a must, but this way seems easier for any range to be deduced without confusion; just requires a little math.

That is a fair point, the issue I was running into is that we work with solid, defined numbers and try to avoid things like percentages. So, I love the training and everything but what I'm gonna have to ask you to do is give each level of it a set range.

Like how the first level gives the user 10-20m, but for each level instead

If you have more questions, feel free to shoot me a message here on the forum or even on Discord!

Your confusing me lol I just removed that bit, in all honesty its mostly me just trying to add more dimension to the ability.

That's totally fine xD I'm sure we can still make it work through RP and everything, sorry about the confusion... But anyway......