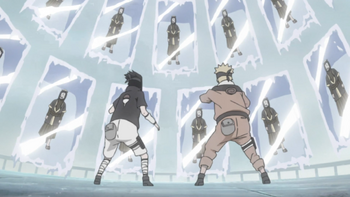 Name: Hyouton: Demonic Ice Mirrors Dome
Specialty: KKG
Rank: A-Rank
Element:
Cost: 35 CP
Range: A ten meter sphere.
Duration: 3 post
Description:
The user creates several large mirrors out of ice, which then surrounds a target within the ten meter sphere it is constructed in. By entering one of these mirrors, the user's reflection will appear in all of them. The user can travel between these mirrors near-instantaneously, giving the appearance that they occupy all of them simultaneously. As such, any attacks they make from these mirrors can overwhelm opponents, seemingly coming from every mirror at once. Using the technique requires a great deal of chakra from the user, meaning they cannot use it indefinitely. If the mirror the user is in is broken, they are forced out of the mirror and land five meters from where it was broken and the jutsu is over. These exceptions aside, the Demonic Mirroring Ice Crystals is still a formidable technique. The user can move between them with their movement or as an action for the turn meaning at S rank you could move four times per turn.