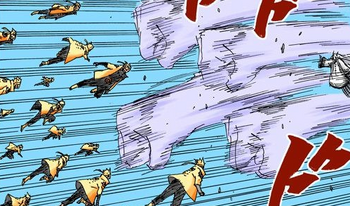 Name: Eighty Gods Heavenly Strike
Specialty: Taijutsu
Rank: S-rank
Element: N/A
Cost: 15 CP and 45 SP
Range: 15 meters
Duration: 1 post
Description:
The user loads chakra into their palms while being under the effects of the gate of wonder and launches a barrage of fists that seem like they are manifesting arms to attack with, but in reality their punches are so fast that the chakra and sweat leave a physical after image with massively destructive force and can completely destroy the area in which they hit as it causes massive shock-waves upon impact stretching out five meters a piece. Because of the speed and force of the technique the user cannot use their arms after the eight gates are over, rendering them unusable for the rest of the topic, regardless of medical healing or not.

Limit of once per topic
Status: Private teachable to users of the Eight Gates