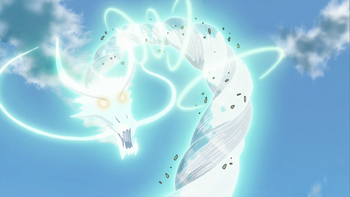 Name: Great Hurricane Dragon God
Specialty: NinTaijutsu
Rank: S-Rank
Element: Wind
Cost: 15 CP 30 SP
Range: 15 Meters
Duration: 2 posts
Description:
It is initiated by an upward spin kick that is suffused with wind chakra at which point it quickly becomes a tornado. Forming into a dragon with long whiskers, it attacks the target aiming to swallow them, at which point they are cut by the razor sharp winds inside the attack. After initiating the attack, the user appears to remain shielded within the base of the tornado as the outward surface of the dragon seems to be solid enough for a person to impact and rebound off of, making the only way to enter the technique once it has been initiated is by being swallowed. However, there is one distinct weakness to the technique. Since the Dragon God's true form is that of an ordinary tornado, its attack power is based on rotation. If one enters the attack's centre (Dragon's Eye) while rotating at high speed, such as the One-Man Front Lotus, it can be dispersed without inflicting damage.

Limit of once per topic
Status: Open