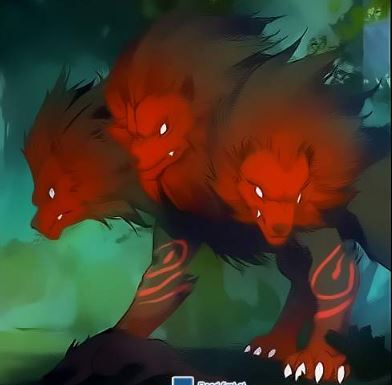 Contract: Lions of the Southern plains


Description:
Shishi-Oni is the progenitor of the Lions of the Southern Plains and one of the Divine Beasts of lore. He is a large and imposing figure standing at 40 meters in total height and about 40 meters long. He is terrifyingly menacing to behold as it seems like he is wreathed in flames and will burn you from just getting close to him, however his spirit like nature prevents that from happening. As the embodiment of rage and fire he has been known to desolate entire villages as punishment for defying him. He is kind and noble however and cares for his pride and all Lion's as if they were his own, being the first of them all. He generally does his own thing in combat however when summoned by someone whom he deems worthy enough to contract him, who also has to be someone who is lion hearted and a noble warrior.

Roar of the Ages!: Shishi-Oni possess a roar gifted to him by the gods that encompasses the fury of all the lions that have or will ever exist. This roar has three effects when used and can only be done once per topic and uses an action to perform the roar.

Triple threat: Shishi-Oni has two heads that are a pure manifestation of chakra that come in to being when he is in combat. These heads can talk, bite and radiate the Roar of Ages from any one of them. Whenever a breath or mouth based jutsu is used by Shishi-Oni it comes from all three heads and blows in several directions because of this.

Divine Beast: Shishi-Oni is one of the Divine Beasts of the gods who resides over several of the summoning contractible animal groups out in the world, his counter parts in the Ursidae and Noble Dragons being the most notable besides himself. They all share a few common traits with each other like unnaturally long life spans akin to immortality as well as an inability to be effected by Genjutsu used on them. Their incorporeal nature allows them to move through objects if so desired.