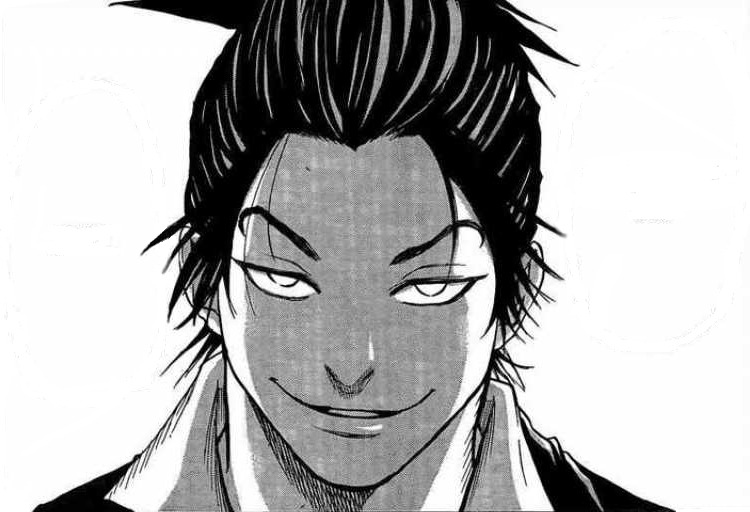 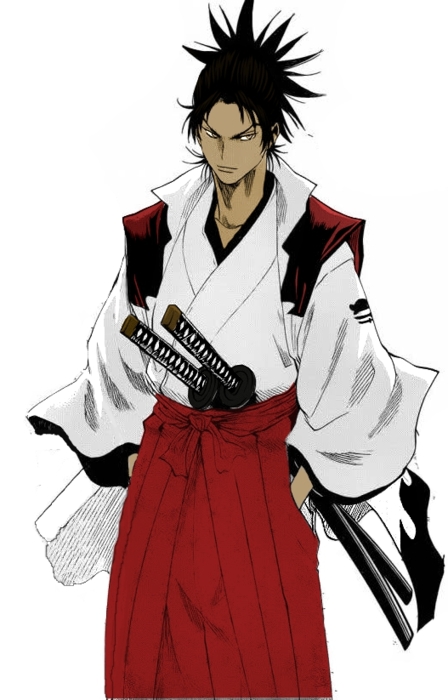 Anubis is easily seen as a man that holds himself, as well as all the things he does, in high regard. He has a very proud posture whenever he stands and even something as simple as walking simply shows that the man is someone of high stature. He stands at 6'0 and has particularly broad shoulders. He weighs 185 lbs and has the build of a man that obviously stays in shape just by looking at his toned body. His hair is black and fairly long easily reaching the top area of his back, thus he will always keep it tied back to avoid it from obscuring his vision. His eyes are almost golden in appearance due to them being a shade of yellow, this added with his natural fierce look may make him appear intimidating to some. His teeth are white and the canine teeth are slightly longer than the average person giving him a more feral side to his natural appearance.

In terms of attire, Anubis has very simple tastes in fashion seeing that he does see himself as shinobi, so he will normally dress in clothes that reflect as such. He has three layers of upper body attire that are both comfortable and do not hinder his movements in any way at all. The first layer is a simple long sleeved white shirt that fits perfectly to his body and the length of the shirt stops just at the waist area, this shirt is always tucked in. Over the first layer he wears a fairly larger red shirt that fits a bit more loosely than the first layer shirt. The sleeves are very large and have secret pockets in them that may hold minor things such as letters or none pointy objects. This shirt too is always tucked in and it allows only slight visibility of the first layer shirt just at the neck area. The final layer is a all black vest that stretches down to the knees and is the most loose article of clothing on his body.

His lower body attire matches the second layer and third layer in terms of color scheme. The pants are made of the same fabric as the second layer and are dark red. The belt of the of the pants is black and made of the same fabric as the third layer and can easily be used to tie down his weapons, being a dual style practitioner. The pants themselves go all the way down and folds so that they can tuck into the all black socks that are on the feet. In terms of foot wear, Anubis technically has none though his socks are extremely durable and made to be able to walk even on glass without it cutting into his foot.

A very observant individual, Anubis is almost always reserved or calm in any situation. Being more of a thinker, he prefers to simply sit in the background while quietly chasing his ambitions. He isn't so much distrustful as he is aware. He doesn't put much past anyone, always feeling that under the right circumstances anyone is capable of anything. Which isn't something he holds against people, being that he is fully aware he is capable of the same. He simply comes off more guarded at a first meeting than he would with someone he has known for a long while. Sizing up a person to see if they are as genuine as they claim to be. This sometimes gives off an inquisitive air about him, not necessarily pumping people for info but rather allowing them simply talk to much. With a sort of "gift of gab", its rather easy to get on people's good side; a trait he is known for. He knows how to remain aloof and yet show subtle signs of interest. Often giving him a mysterious and unpredictable appeal air about him. He doesn't make himself unapproachable, in fact, he enjoys the company of others and isn't shy around new people (just deceptively cautious).

Though he is very empathetic, he is a firm believer in letting one learn from their own mistakes and failures. He feels that always helping someone from their problems cripples them. His philosophy is that one cannot truly grow unless they learn to overcome the obstacles life throws at them. This in mind, he will almost never assist someone if he deems the person capable of handling it. So long as a life isn't immediately in danger, he is the sort to see how things play out; feeling he is doing the person in question a service rather than being callous. In truth, he cares deeply for any one he calls friend or comrade. With his troubled past, Anubis has seen and lived in a dog eat dog world. In order to not only survive, but to thrive in the world one must be mentally built for it. And lessons learned firsthand always show just exactly where one stands in the world. To cheat someone out of something of the magnitude, in Anubis' mind, is just as bad as killing them. Because if someone who isn't cut for a task is chosen to see it done, others could be effected in the worst ways. A harsh philosophy, but one Anubis believes in wholeheartedly to be true and thus almost always acts accordingly.

Though he is not easily angered, he does not take kindly to threats. He will gladly face any sort of threat face to face, regardless of circumstances and will not waver. Anubis is, however, far from fearless. Where most would freeze from the feeling of fear, Anubis accepts the feeling as a normal reaction and copes. He will never admit he needs help, due to his philosophy, and meet his problems head on. A weakness, some would say, since Nogard is quite indiscriminate when it comes to dealing with his problems. Almost all resolutions being treated with the same severity. However, he will not turn down help if it doesn't jeopardize a mission/task or if it is of the person's own volition, though begrudgingly so. Anubis knows the value of teamwork thus he will never simply let someone he cares for or allied with die or suffer pointlessly. If he can tell by the situation at hand that the task is to difficult, without question Anubis would interfere. The thought being that the dead can't learn from dying.

Anubis is a very driven and ambitious young man, always eager to showcase his skill and ability in any competition. Despite his normally calm demeanor, he shows more emotion when in any contest. One of the few times when one can catch him at, for lack of a better word or term, his most innocent or pure. Simply put the young man can't resist a challenge, mostly out of sheer pride and the feeling of being victorious. There is also a sense of "testing ones merit" as he would say, to see whose path in life had benefited whom the most. Combat or politics, Anubis takes joy in both as it keeps his mind sharp and aware. Under the ideals that a weak body makes a poor warrior and dull mind makes poor scholar, Anubis is a well-read and physically fit individual. One of the few ways to actually get under the young man's skin is to interrupt his training or studying. A task not easily done due to the sheer amount of focus and determination he pours into both tasks.

History:
Anubis was born as the first child to parents whom he thought adored him. A year after, Hayato was born to this same loving family. Life was good for the boys. They held little care about the world, to them this place with there parents was a utopia. Sadly, this would not last. Anubis was the one who discovered his parents true colors. He would sometimes catch them, without being caught, abusing drugs and even seeing his mother sell herself for money. Such was the harsh reality of the two boys circumstance, something Anubis always hid from his little brother. However, it would only get worse when the day came for them to be taken away. The parents that Anubis trusted with his life, being to young to know any better despite what he had seen, had sold their two sons into slavery. Emotions ran wild as Anubis tried beg for help, only to his parents turn their back on him.

The next chapter of their life was filled hard labor, poor food quality, sleeping on the hard ground, and daily beatings. Anubis, whom had vowed to protect the only true family he had left, often received beatings by interfering when Hayato was involved. Incidentally, they caught the attention of another slave, a man who had lost his freedom when had tried to free the slaves. He noticed that the two brothers were not broken spirited like the other slaves. This lead to the boys eventually learning from the old slave. It was he that pushed the "knowledge is power" concept on the boys. During this time is when Anubis discovered the ability of Jegan'ai and what little he learned of it in regards to the origin was explained to him by the old slave. The old slave urged Anubis to cultivate his newfound ability in silence and that one day it would lead him to his freedom.

When the time came, Anubis had secretly rallied the other slaves to cause a mass rebellion. During the confusion, the brothers and their mentor cut down all who stood in their path. They made their way to the nearest village, Debon in the land of the Sun, and parted ways with their mentor; who chose to continue on and putting distance between him and the area. Anubis recalled the skills of the ninja that he had seen, and wanted that for himself. This in mind made him and his brother move to Nikkousato to pursue their dreams. It wouldn't take long before they were able to explain their situation to the authorities. From there the boys were given a small one home, and at the brothers request, get enrolled in the academy. After only a year, Anubis being 15 at the time, the two graduated and earn the right to be called shinobi. The same day he and his brother took the last name Raionhato, which meant "Lionheart". With nothing to his name aside from the skills he learned and a heart full of ambition, Anubis vowed to establish a name for himself. He would one day get revenge for what was done to him and his brother, and become known as the greatest shinobi to ever have lived. 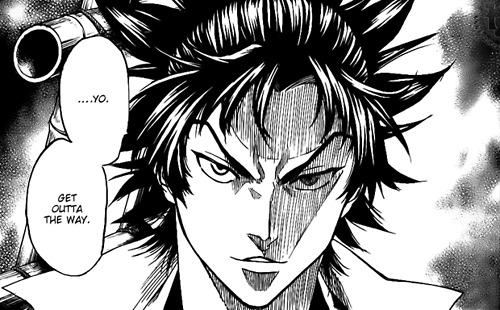 Face Claim: Sengoku Iori
Owner: Raionhato Anubis
The author of this message was banned from the forum - See the message
Sojiro Sakura