Fly Me To The Moon [Travel Topic]

Fly Me To The Moon [Travel Topic]

Arashi gathered his things and set off on an adventure to the Moon Village, He had been assigned a mission there and he wanted to get there as fast as possible. Maybe he could do a bit of sightseeing as well! Since he had never been to the Moon before so it would surely be a nice experience. He had packed a bunch of food and water for the trip, So as he passed the gates and hailed the guards, he walked into the distance of the desert.

he took the north route and walked halfway through the continent until he got a bit bored, that's when he realized he could make this faster if he used one of his jutsu, So he started to run and with some hand-seals, he released his Lightning Eagle technique together with its tether, and began to fly through the forest, every once in a while he had to add some more chakra into his jutsu in order to keep it flying. In this way, he would move almost twice as fast as he would if he were doing a full sprint. While it costs chakra, it was still amazing how easy it was to move this way, at this rate he would have to create even more traversal jutsu. Arashi flew above the trees feeling the wind to his face while riding an eagle made of pure electricity, it was an almost surreal sight and feeling, and as he did this he said. "Let's fly to the Moon!"

As Arashi flew majestically through the air on his lightning bird there would suddenly be a flashing of red and blue lights behind him which were accompanied by a siren going *wee-woo wee-woo wee-woo*. If the Sun shinobi turned around he would see two identical men astride a flying water shark! One had flashing red and blue lights on his shoulders while the other was literally just shouting “wee-woo!” for the siren over and over. They were both wearing identical shinobi shozoku and porcelain Hannya masks, so their bodies were completely covered and it was impossible to tell them apart. 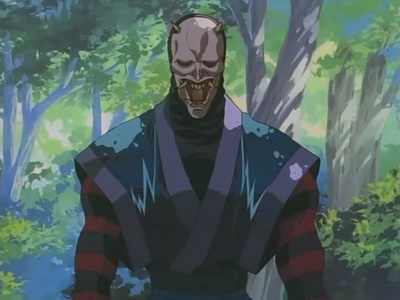 The one with the lights on his shoulders shouted to Arashi while pointing downward,

Arashi was quite shocked by this situation, not really knowing who these people were or what was really happening, He blushed a little and awkwardly flew downwards going progressively slower and jumping down once he was going at a reasonable speed and height. "S-sorry did I do something wrong..?" He asked confused and embarrassed while scratching the back of his head.

He wasn't sure of what was happening or why two masked guys were hot on his trail, but since he doesn't like being troublesome, he would take his chances with this being either a joke or that he bothered someone by accident, in other words, nothing that a simple talk and apology wouldn't resolve, and while that might be a gullible attitude he preferred to be marked as dumb rather than mean. And even though he would approach this in a respectful and slightly submissive manner, he would still be alert and keep his guard up, after all, he might be a bit gullible and nice but He was keen, and could change his demeanor and attitude in the blink of an eye. So from fooling him to catching him off guard there was a respectable distance.

Gozu (the puppet) and Meizu (Tatsuya) jumped off their water shark and landed 15 meters away from Arashi. Meizu pointed a finger at Arashi and started rattling off a list of accusations,

“Speeding, flying without a seatbelt, failing to signal turns, flying an unregistered vehicle, and I bet dollars to donuts that bird isn’t spayed/neutered. Oh yeah buddy, we’re gonna have to take you downtown.”

The two shinobi wasted no time in attacking. Gozu, the puppet, would dash forward and leap covering the 15 meters between the two parties immediately, which was shockingly fast for any but the strongest of shinobi. A hidden meter-long straight sword would extend from the “man’s” right sleeve, the blade dripping with a faintly purple transparent liquid, and he would swing it vertically downward at Arashi’s head whilst being in mid-air just above him. The sun was also to the Demon Brothers’ back giving him the advantage. If Arashi looked up at Gozu to block he’d be looking directly into the sun, blinding him. Gozu let out a wailing battle cry as he attacked.

At the same time, his “brother” lept at their opponent Meizu would quickly weave a set of kata and cast the Swamp of the Underworld technique. Right as Gozu’s blade was descending toward him the ground underneath Arashi would collapse as it instantly turned into a 20-meter wide, 10-meter deep swamp of sticky mud, centered on Arashi. If he wasn’t careful the muck would suck down his entire body. It was a dangerous pincer attack from both above and below!

Actions:
Trick Urumi (Adding one of two doses of poison)
Swamp of the Underworld: 25 Chakra

"Wait What?!"As the first "shinobi" ran forwards at blinding speed towards Arashi, he found himself without much time to think, but thanks to his training he knew it was better in certain situations to dodge forward rather than backward. So when the shouting man jumped Arashi dived forward and slightly to his right, moving around 4 meters in that direction, hoping his opponent would miss his mark. While he took out his sword the ground became mud, But if he couldn't move easily his opponent wouldn't be able to either so he used this opportunity to attack with his weapon ability, slashing vertically towards his enemy with a 5-meter extended range, hoping to hit the attacking "ninja" in the back.

Arashi dodged the swipe of Gozu’s blade but seemed to have misjudged the distance of the swamp. It was 20 meters wide in total but had appear centered on Arashi’s position before he dove. This means it would have extended for 10 meters in any given direction and Meizu, who was 15 meters away, would not be standing in it. When Gozu landed from his attempted attack he would seem to be standing on the swamp unimpeded, perhaps by channeling chakra through the soles of his feet but was actually hovering just above the surface via the puppet strings. Arashi launched a chakra slash at the puppet but the puppet was quite fast and Meizu manipulated it to make it seem like it had leaped into the air to avoid the attack. The puppet strings would move up with the puppet, making sure the slash did not cut them either. It would come back down 2 meters north of its previous position.

Arashi had dodged the attack but had left himself in quite the predicament, the Swamp of the Underworld would suck him down, immediately pulling him down up to his waist, making it almost impossible for him to move as well as threatening to pull him down completely. However, the Demon Brothers would not wait for him to extract himself before pressing their attack.

A small pipe would extend from Gozu’s left palm as the hand rotated a full 360 degrees, it was clearly artificial in nature, but he would not have been the first person to alter his “body” with puppet parts either. He would slash his hand forward in an arc as the pipe shot out a high-pressure stream of water capable of cutting through rock. He’d angle it down so it swept across Arashi’s waist, which was now level with the ground, to make sure the blast didn’t hit Meizu on the other side of him.

After he did this Meizu would again make a series of kata before thrusting his arm forward at Arashi. The very same water his puppet had just used to attack Arashi would mold together and throw itself back at him from the rear this time in the form of a giant Water Shark Bomb! Arashi would hopefully be unable to extract himself from the muck before the shark collided jaws first into him and burst, bludgeoning him with extreme prejudice as well as lacerating him with its teeth.

Arashi got suddenly caught in the swamp, which reached all the way to his waist. barely able to move he used a technique to get out, he started doing hand-seals, and when he was about to get hit by both techniques, he released his jutsu the Lightning Eagle with its tether. He would fly 2 meters up dodging both the shark and the high-pressure shot of water, then moving 5 meters towards Meizu and preparing another technique in the way. He would then launch his Electricity Granade jutsu which would move at blinding speed towards Meizu hopefully hitting him.

The Raiton jutsu was incredibly fast and hit Meizu on the shoulder, striking his flak jacket. The gear insulated him from the attack but was also ruined by it, so he threw it away. At this point in the fight, the swamp jutsu would disperse, leaving behind a 20-meter wide, 10-meter deep pit of dried mud.

Gozu, now hovering in the air where the swamp had been, would leap towards Arashi’s back as he flew, easily covering the distance between them and aiming another slash with his poisoned blade to cut down Arashi’s back.

At the same time, Meizu would make a single kata and it would begin to rain, quite heavily.

After Destroying Meizu's flak jacket, Arashi Dissipated his Eagle's tether and jumped down with a backflip while launching the eagle towards Meizu, it would move 7 meters towards him and then 1 extra meter as it changed form into that of a spear. While Flipping in the air he saw as Gozu approached at blinding speed yet again. Whatever this guy is he sure is fast Arashi thought to himself before landing and facing him, Arashi Would prepare by lifting his sword over his head, If Gozu didn't miss his mark and still went for Arashi who was now in the ground, he would use His Uchi Otoshi Waza technique, Hopefully deflecting Gozu's strike and then following up with a horizontal slash. If Gozu didn't follow him down Arashi would just prepare for any subsequent actions the duo would make.

Meizu would move in a blur, his body vanishing and reappearing 5 meters away, as he used the Body Flicker Technique to avoid the Raiton jutsu arcing toward his body.

Gozu would clash with Arashi's blade but unfortunately, his parry was not strong enough to deflect Gozu's attack. The many metal lashes of the Urumi would come free at the impact of Arashi's blade and flick upward, lashing him across the face and chest. The cutting damage itself was superficial but the Urumi's own innate chakra draining ability along with the poison that was along its blade would immediately drain the remainder of Arashi's chakra, rendering him unconscious.

The Demon Brothers stood over the unconscious shinobi before turning away and disappearing back into the wilderness that bordered the Kataki Road.