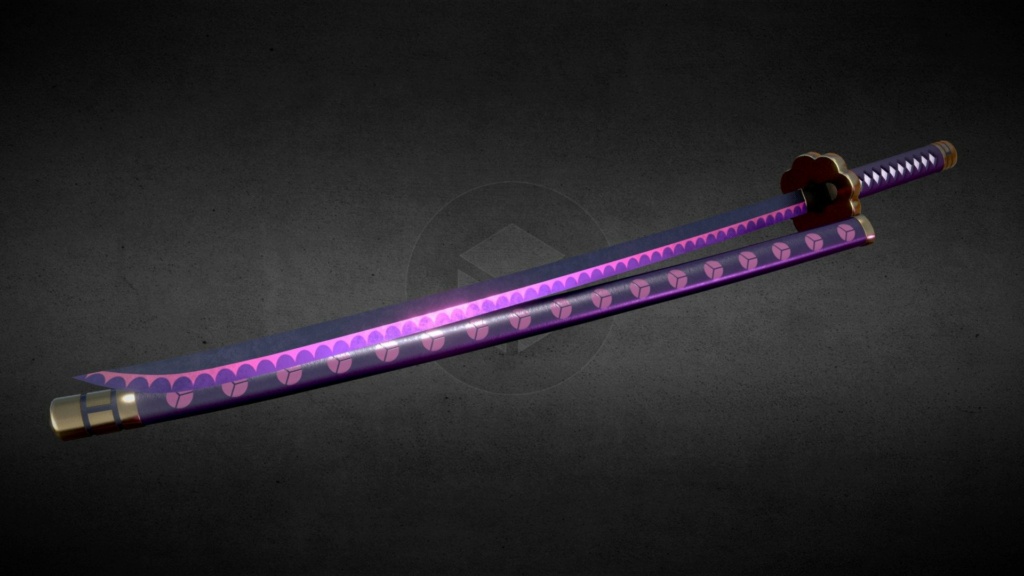 Name: Onikage
Type: Weapon
Size: Medium
Rank: A-Rank
Description:
Onikage is a uchigatana length katana of about 70 cm in total length. It is a black blade that has a distinct reddish-purple reverse wave hamon that is of a Kanemoto style, and its tsuba has flower-like edges. It also has no accessories on the hilt, being wrapped simply with black silk. Kashira, tsuba and kojiri end cap are golden, and the sheath is black, decorated with dark red circles split into even thirds. Its a beautifully crafted blade that is handed down from clan head to heir apparent within the Tsuyoiito for generations.
Function: Like any normal katana it can be used to slash, stab, block and parry attacks.
Abilities:

Crescent Moon: With this blade Keiji can spend 5 chakra per slash and release a wave of hardened chakra out to five meters with each one greatly extending the range of his attacks. The wave is 3 inches thick by 3 meters in length and a meter in width making a D shaped arc of cutting force that launches outward from the blade.

Summer Haze: The pattern in the hamon of the blade vibrates when chakra is infused into the weapon causing it to form a ripple like effect that distorts where the blade is seen in reference to a visual range, this makes dodging attacks from the weapon harder when within two meters of it if a chakra based technique is being used or in use with the blade, forcing the opponent to block the strikes rather then dodge it as they would instead misjudge the striking range.

Raging Sun: Katon was sealed into the blade during its forging process making it naturally affiliated with the fire element. This has two practical effects, the blade can be covered in fire if the user so wishes by an infusion of 10 chakra and this lasts for the topic or until it is doused by water, this also allows it to naturally rip through wind based techniques by cutting into them with the sword cleaving them in two, which allows the user to block said attacks with simple sword strikes, and pierce through wind based defenses.

Crescent Moon: With this blade Keiji can spend 5 chakra per slash and release a wave of hardened chakra out to five meters with each one greatly extending the range of his attacks.