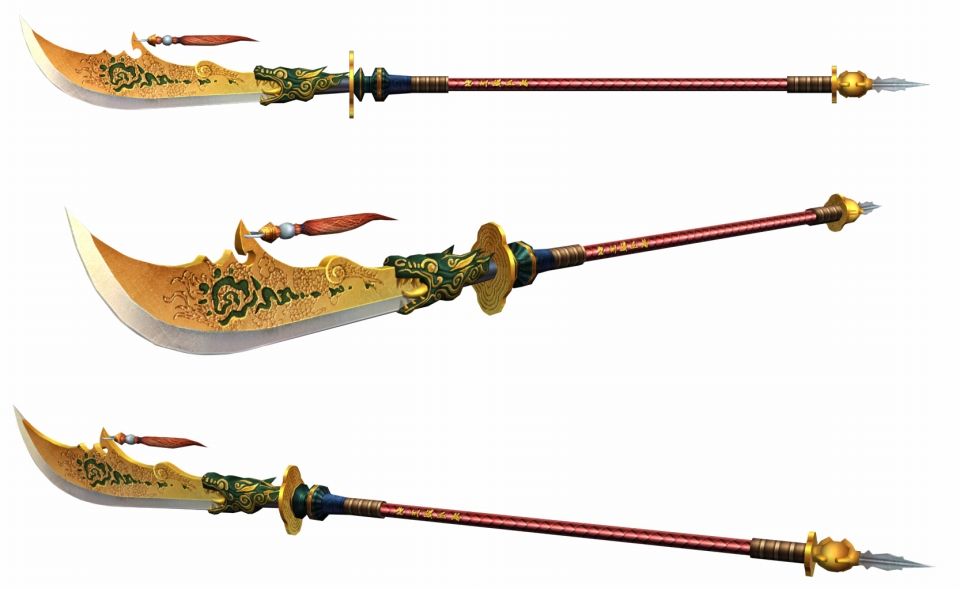 Name: Golden Dragon Blade
Type: Weapon
Size: Large
Rank: A-Rank
Description:
The Golden Dragon Blade is a Guandao of impressive size made to be used while on horseback due to its massive weight and length. It has gold and red motifs and a highly ornate look to it as it was a weapon of antiquity that Keiji has come into possession of. Its heavily dragon accented design is a reference to the Dragon of the East's own Guandao the Greend Dragon Crescent Blade of Hyuuga Zhurong. This Gaundao is two and half meters in length and can attack up to three meters away because of its size.
Function: It can block, stab, slash, bludgeon and parry like any other glaive like weapon.
Abilities:
Raging Dragon: The blade itself is imbued with raiton and has the unique ability to channel and generate lightning around it from simple chakra infusion. This means that by inputting 10 CP the blade will stay coated with lightning for three posts. This increases the piercing strength of the blade to its highest point making stabbing attacks with it quite effective. This also allows it to rend through earth based defenses like a hot knife through butter.

Burgeoning Might: The user of the glaive is imbued with great strength when wielding the weapon on the ground, allowing them to use it one handed for the cost of ten stamina per post it is used this way. Its massive weight giving it higher then normal bludgeoning damage when used like a club with the flat of the blade heightening the weapon to that of S-rank when used so.

Equestrian Glory: This blade is meant to be used from horseback or while mounted and when it is used this way the user can freely use it one hand without any extra input of stamina or much effort, almost as if your mount is lending someone of its own might to wield such a mighty weapon. This also confers a benefit of 3MPP per post to your mounts movement speed, as they are urged on into battle while wielding such a mighty weapon!

Gonna need the mpp added to the mount taken off bud