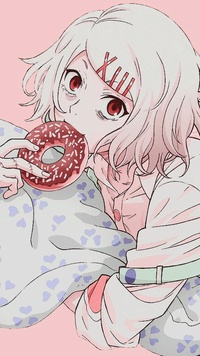 Spoiler:
Name: Signs of Murder
Rank: C-Rank
Participants: Moon Village
Type: Plot Mission (leads to future plot event)
Reward:
Solo: 20 EXP
Group: 25 EXP, 20 Ryo
Location: Moon Village
Details: A string of gnarly murders have begun to pop up around the Moon village. At least every other week a dead body pops up in a random place in the village. However each of these murders have something in common. The body is stretched out and painted with a giant red A across the body and the surrounding environment. It is clearly a warning, but for what? Moon Shinobi are being tasked with investigating the crime scenes and gathering clues as to what these murders might mean.
Requirements: Solo must make a 600 word post.
Group- Each person must post at least twice, with a 1000 word count total.

Now this is what I am talking about, finally a real mission. For the last week I have been doing nothing but odd jobs for the village, from delivery food to plucking weeds, it has all been one giant headache. Today was different though, as I arrived to the Kage’s office to receive a new mission, one that would finally bring some excitement to my life. Unraveling the mission scroll, I carefully scanned the details of the job, excitement welling up inside of me with each and every word I read. Maybe all of those small missions I did were starting to pay off, maybe finally I was being recognized by the higher ups as a competent shinobi.

Standing outside a dark building my eyes rested open an open doorway, the entrance to what use to be an office building. This was the location of my mission and happened to be a crime scene. My job was easy in theory, to investigate a murder scene here at this abandoned building. Apparently the building use to operate as an office for shinobi, a work room where files were stored for later. It had long been abandoned as newer and nicer buildings were being built. A day ago someone had reported odd sounds coming from this building and a disgusting smell radiating from this area. A couple of nosy citizens decided to check it out only to find a murdered body, along with some very alarming symbols.

The wind blew through my soft white hair, kicking up the tan coat I wore, unbuttoned of course, as I decided to take a step forward and get to work. The mission was nothing but a crime scene investigation, but who knows what else could have been in there, or who else. For that reason I decided to bring my entire set of ninja gear and weapons. If someone wanted to fight, I would surely give them one. Pushing the already half cracked door open, I slide inside, trying to remain as quiet as I could. The building was dark of course, using the moonlight and the street lamp from outside to guide my way.

It took me several minutes to move through the building, checking each room, poking my head in and out, making sure to find any clues that might have been left behind. For the most part it was just an abandoned building, and if anyone had come this way, they did a very good job of covering up their tracks. I was more than half way through the building when suddenly I felt it, a weird sensation in the air, like an evil presence was hanging in the air. At the same time my nostrils caught the scent of blood, a few days old but still fresh enough to matter. Maybe there is something wrong with me? For as soon as I located the scene of the murder I got all excited, ready to see just how bad it was.

I expected it to be bad, but holy hell it was way worse than I could have imagined. Pushing open the door to the back room, I saw it, an entire room covered in blood and visceral left overs. This was not just a murder, but a full on slaughter. The room had these weird circles painted all over it, in what could only have been the blood of the victim. What a way to go, who ever did this was not only killing people, they were making a point. It took me awhile to scour the room, picking up clues, writing down details, making sure to cover the full length of the room. Luckily for me no one or nothing was still here, so my investigation went pretty smoothly. Heading back to the administration building I could not help but reply the crime scene in my mind. Was someone really going around the village and brutally killing people like this? It was insane