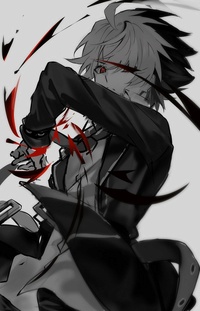 
Appearance: Jiwan is a young boy of average height with strange, dual-toned, messy hair, being bleach blonde at the front and black at the back end. His eyes are a dark red and have cat slit pupils. He is commonly seen wearing his school uniform in a rather sloppy manner. His apparel consists of an black, unzipped blazer with gold rims on the lapels, collar and pockets. He has a small belt with a golden buckle each wrapped around the sleeves of the blazer and the right arm is embellished with the emblem of his school. He wears two more normal sized belts around his waist, the top one is done up but not buckled while the bottom one hangs loosely. Underneath his uniform, Jiwan wears a white, long sleeved polo shirt with the topmost button undone, revealing a red shirt underneath. Jiwan loosely wears a red tie with two black and red stripes on the back of it. His leg wear consists of black pants with two zippers going up to below the knee and black, leather shoes with a gold stripe going across the front.

Personality: Jiwan is best described as an enigma; he tends to keep silent about himself and his situation. Due to his upbringing, the young man was taught to suppress his emotions in front of others, even one's comrades; to show such was considered weakness, and the kage prided his soldier on being the perfect weapon. As such, the male comes across as cold and heartless to most people, choosing to focus on the mission at hand.

Jiwan was taught all throughout his life that violence solves most problems. If violence was not solving all of your problems, then one was simply not using enough of it; as such, the male has quite an appetite for destruction when activated. In his genin class, the young male is regarded as one of the most prodigal minds when it comes to the Art of Kenjutsu, leading to the male to develop a quiet confidence in his skills.

On a personal level, Jiwan tends to find most people boring, and easily predictable in terms of behavior -- a trait that his superiors value for him. Jiwan tends to analyze people as he meets them, taking note of certain quirks and habits of thier personality. As such, he is an excellent information gatherer...

History: What would you do if everything you loved and held dearly to you was suddenly taken away? What would you do if you couldn't remember it? Thoughts, memories, ideas, all gone because of some unknown means just to leave you stranded in a world that only partly made sense? That is essentially  Jiwan's life now. Lost in a world He cannot understand with thoughts suppressed that He would likely never be able to know again.

Jiwan  had a loving mother and a loving father. They dotted on his as anyone did a child they cared for, and He was always provided for. Training and teachings came daily as He was taught to grow, taught to protect the village He called home. When his father wasn't busy working with his with training and teachings his mother spent time turning his into the up-most proper female that He could.  Jiwan  was taught early how to act, how to speak, how to be polite and use manners.

However, hardship hit the family quite early on in  Jiwan's life. his mother and father took ill; an unknown sickness killing them slowly but surely.  Jiwan  was left alone; found days later when the stench of the rotting bodies reached the neighbors house and they called the authorities to come investigate.

However, before they could reach Jiwan, he was taken by a man cloaked in shadows. Restrained in a way He couldn't get out of, he was dragged off minutes before what would have been help arrived. He became the man's servant, but not before being branded on his hand with a specialized seal that, were He to escape by some means would erase all of his memories through a violent and powerful genjutsu.  Jiwan  served the man for a very long time, knowing nothing else but the treatment He received.

However, soon this man too became sick and the sicker he got the weaker the power he held over his got. There were timed lapses in this, and after careful planning  Jiwan  made his escape. However, as He did so the genjutsu came into effect causing his to lose not only his memories of the man but any past memories at all outside of his name: Jiwan.

Jiwan  wandered for days until, sick and weak, He stumbled across the village: the same village He had been taken from all of that unknown time ago. After finding some scraps of food and water  Jiwan  began his life as a street-child: unaware of all of the budding power hidden within his, and waiting to be unlocked and tapped into.

It was not long before a kind, elderly couple found the child and took his in, assisting the child through the difficult time of his life. Jiwan was shown a kindness that He could not remember, and came to love the couple as much as they loved his. At their urging, Jiwan was enrolled into the Kumogakure no Sato Shinobi academy, where He proceeded to excel at nearly everything that was placed before his. It was here that the child found his calling; He was able to mix the disciplines of Fuinjutsu, general ninjutsu, and  his love of weapons to form a completely unique style, one that would see his through graduation and into his genin career.

There is a point where you needed to stop

And you have clearly passed it

And see what happens, Guest.