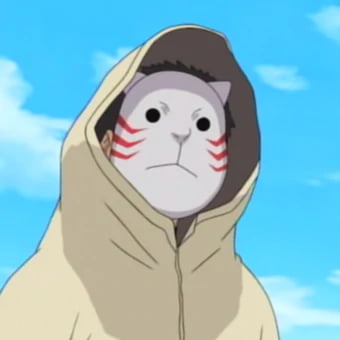 
Appearance:
Brown hair, blue eyes, a permanent five o’clock shadow from ensuing puberty. Depending on the lighting, Senkou either looks his age or twenty. His eyes have a permanent tired look to them from constant reading into the night and early morning. His hair buzzed short for minimal fuss and efficient shower time. His height and weight are average, physically the only thing that is particularly noticeable are his long thin fingers and steel cord like muscles that are usually hidden under his clothing.

For clothing, Senkou wears a grey short sleeve tunic with gray pants that stop at his ankles. His hands and feet are wrapped in bandages. He sports a pair of sunglasses and a blank white mask. Over all of this is a white hooded cloak with long wide sleeves and a lot of pockets and straps for his equipment.

Personality:
There’s something to be said about a kid who spends his time pouring over books about any subject imaginable. Words like nerd, weird, freak have all been bandied about in respect to Senkou when he left his home among the Teishin Shudan and was sent to Gekkousato for training to become a shinobi. Senkou would use the prepared to describe himself, though he does admit he is quite a nerd at the same time. A side effect of his passion for knowledge.

To cope with this teasing from his peers in Gekkousato, Senkou would find himself frequently inside a tea shop with a nice cup of jasmine tea and a treatise on the applications of certain chemicals in warfare that was recently sent to him by his elders back home. This of course did nothing to dissuade the previous notions. If tea wasn’t enough, ramen would have to be the ultimate comfort food for him, though the broth here in Gekkousato just lacked the clarity of flavor that could only be created by the purity of the mountain streams that fed the well system of his home.

One could conclude from these statements that Senkou was homesick, that is not the case, he simply has the view that his clan, through their continued pursuit of progress, have achieved a superiority in such matters. This pride has its roots in his own obsessive pursuit of progress as a shinobi and an individual. Senkou does not accept finality in failing for himself or anyone else. There was always something that could be done. This attitude towards life certainly has its negatives as it tends to isolate Senkou as others find it abrasive and disconcerting to be faced with their own failures from someone that they barely know.

To finish, Senkou sees challenges the same way a dog sees a rabbit. Immediate, relentless pursuit till overcome and then left with the satisfaction of a job well done till the next rabbit darts from the underbrush and the cycle continues.

History:
Born to an engineer father and a chemist mother, Senkou grew up in the sounds and smells of industry. Training in these intellectual disciplines started immediately as his mother would read about her latest work to him to put him to sleep up to the age of 5. His father would bring him to work and would point out all the projects he was working on what they did or could possibly do, this particular activity didn’t stop till he left for Gekkousato and to be honest it didn’t really stop there either as the mail Senkou would receive would often have letters from his father about his work.

As soons as he was able to walk, physical fitness took over as the Teishin Shudan mandated that intellectual growth should mirror physical growth. Complicated obstacle courses to train the mind and body were a daily part of life as a form of amusement. This rigorous standard produced a very healthy and intelligent populace, though the lack of real leisure would make this way of life seem draconian to outsiders.

Every child that was going to the academy in Gekkousato would create their personalized weapons as a rite of passage. When Senkou reached that age, he created for himself a series of weapons revolving around the application of sound, sight, and smell. He had developed his own treatise on warfare and was determined to prove its effectiveness in the world at large. His upbringing enabled his success in the academy and now as a newly fledged genin, his development as a shinobi was only in its infancy

Re: Senkou Wakaranai, The Unorthodox