Tatsuya was handed a scroll from a messenger while he sat inside a sushi joint, enjoying a nice cup of sake with his meal before he was so rudely interrupted. He took the scroll and unsealed it, reading the contents before going,

“Ah yes, I see, a traditional exploding ghosts mission… WHERE DO YOU PEOPLE COME UP WITH THIS SHIT!?!” Tatsuya threw the scroll back at the messenger and got up from his seat, tossing an assortment of bills onto the table to pay for his meal before stamping out. This was another mission that was going to require some travel so he went back to his small house and packed a bag and was soon off onto the main road out of Nikkousato. His smooth black hair was tied back in a tail that went down past his shoulders and he wore his usual attire a black suit jacket and dress pants over a white button-up shirt with the first few buttons undone, black leather gloves on his hands, the right one bearing the seal to store his puppets, steel-toed shoes, and a patch over his left eye. He was armed, of course, but preferred to keep such things hidden until they were needed. He stopped at the gates of the village since he was supposed to be going on this one with another Sun ninja, so he would wait for them to arrive, a smoking cigarette hanging between his lips.
Sakuragi Kokoro 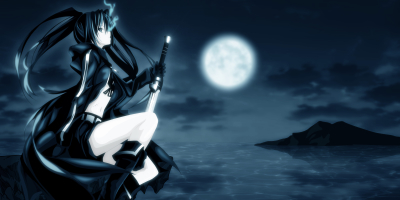 ~~~~~~~~~~~~~~~~~~~~~~~~~~~~~~~~~~~~~~~~~~~~~~~~~~~
Kokoro had been quite busy herself, busy eating that is. She was at one of the local ramen shops, a joint she visited more often than her own home probably, that the owner not only recognized her, but would give her free food and drinks every time she went. A loyal customer with a big appetite and yet be so skinny at the same time. It always created confusion and awe among the other customers, and rightfully so. Kokoro ordered a miso ramen with extra servings of noodles, some fried gyoza or dumplings, a big dish of fried rice and some fried chicken. Not exactly a meal for a lady, and her table manners would further confirm this, as the other customers watched her scoff down the food, barely pausing to chew or breathe. Such was the mannerisms of an Inukura, and she had gotten so used to the stares that it barely phased her. She was busy loudly slurping the ramen noodles when she felt a tap on her shoulder. As she glanced behind her, her blue eyes would narrow, giving whoever it was that had tapped her something of a death glare.

Nobody interrupted her when she ate...especially when she was hungry and eating.

The young messenger felt her wrath in her facial expression, his own face paling and fear stricken. He handed her an envelope with her name of it, quickly disappearing down the street without uttering a word. Kokoro sighed, recognizing that the envelope contained her next mission, or at least details about it. And she thought she could have a day off and enjoy being lazy...she thought to herself, putting the envelope on the table. Finishing her meal hastily, she would pay for it and thank the owner for always making her extra portions. Kokoro barely ever disappointed in terms of her eating capacity, having a stomach similar to that of a black hole. The girl would hop down from her stool and start to walk down the street when the messenger boy from before would return, his face still a little afraid of the young girl. It always surprised her how someone of her height could be seen as such a scary person especially when she didn't mean to be scary at all. The boy had forgotten to give her the mission scroll and had returned to finish the job. Again he would swiftly walk away after she took the scroll from his hand. The girl examined the contents, reading over the description and raising an eyebrow.

Kokoro had no idea what that meant. She had never gone on this mission before and was rather intrigued at what lay ahead. It was much better than scouting the border, she assumed. Quite frankly, anything was better than scouting the border. Kokoro would walk down the streets, noticing the time of day, and head to the meeting place, the village gates. She was wearing a small black dress with leather high heeled boots, to give her some leverage of height that she didn't naturally have. Her wakizashi was sheathed underneath her belt and her weapon pouch was strapped to her thigh. She knew she was going on a mission with another Sun shinobi, as detailed on the scroll but she wasn't sure who. Popping a breath mint into her mouth, she thought it was probably best she didn't smell like ramen and dumplings. She always had mints with her somewhere since she loved eating more than anything in the world.