Spoiler:
Name: Voracious Vorrapede
Rank: A-Rank
Participants: Anyone
Type: Group Mission
Reward: 65 EXP, 40 Ryo
Location: Regions 4,5,6
Details: A hungry and seemingly unstoppable Vorrapede has been spotted tunneling through the earth and has recently surfaced. The large worm is causing all kinds of destruction, smashing buildings, destroying land, and it is forcing people to flee the area. you are tasked with hunting down this creature and exterminating it.
Requirements: Each person must make at least six posts, totaling to 2400 WC

It had been yet another week that the young ninja known as shinigai had spent in the Village of debon. There he had found some traces of his old life and some traces of what would be his new life. Sure he would begin to keep himself hidden as more ninja from his old village would begin to make their way to the village trying to help with the establishment of the new arena. He had seen some faces that he could not simply speak to. In fact he had seen the same face of the girl that wanted to stop him because it was the way of the village. With all of the traveling and the new faces popping up in the village Shinigai began to adopt a new look, as he would begin to wear a long cloak that would cover up his whole body and would also have a hood. He would also wear a lion mask upon his face to hide it. This had been the only way he would be able to roam around the village unnoticed by his old teammates and village mates.

The night before the members of this group had gathered something crazy and yet amazing had occurred just outside of the village. The ground would shake as if the whole village was about to be swallowed into a sink hole and the villagers would run in panic. A beast would arise from the ground and swallow the earth as it would appear just outside of the small walls of the village. This was a Vorrapede. Much like an earth worm it existed to devour earth, but there was one more thing it existed for. To devour man kind. As it would attack the gates of the village the villagers would be able to fend it off for a bit as it would burrow underground once more. Keeping their guard up through the night the leader would create a sign that would call for help against this threat before it would attack once more. Shinigai standing there would accept the mission the next morning and await for the two ninja who had already accepted the mission. As he would lay his back against the broken wall and ponder just how strong this beast had actually been.

The morning after the Vorrapede attack, there was a group that was interested in expanding their name that had decided to step forward and get involved in this case. Everything that did was to ensure the safety of the people, so when the village had put out a mission for the elimination of this beast, this group had decided to answer to it. One of the many members of the group had been sent out to take the mission, finding it one the mission board within Debon and finding it a simple enough task. The woman who had grabbed the mission let out a sigh as he walked down the streets towards the village gates. The woman had russet-colored hair on her head, wearing a white shirt with no sleeves and a red cape that rolled down her shoulders, wearing a pair of tight pants and shoes to finish the outfit off. The woman openly wore several weapons; a bow with a quiver on her back and two swords on her waist, a katana and kodachi on the same side. And, despite not having met Shinigai before, the woman also seemed to wear a mask that only covered the top half of her face. It seemed to be that of a fox.

As she approached the village gates, she would see the cloaked man and the fact that he wore a mask before letting out a soft giggle, "Well, this is awkward. Whoever ends up taking this mission with us may felt left out, stranger." She teased a bit, her pink lips curving upwards into a smile. The woman would walk over to the destroyed parts of the gates, past Shinigai, and began to examine the area. It seemed like the woman was doing her best to try and get some tracks to follow, or anything really. In reality, the woman was trying to pick up on the scent of the creature, anything that could make this mission easier for them to handle, "Not to be cheesy, but you can call me Kitsune for now~" 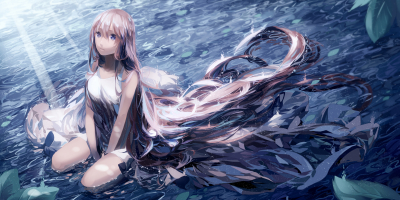 Ami had taken on a mission for the village of Debon, a place where she had only been to once. She had decided that a change of scenery was necessary, not that it would have made much of a difference in the long time. The young Hyuuga had been through a lot in the past couple of weeks and all the emotional stress was starting to get to her. So today, she would venture out of her village, leaving her Gekkousato headband behind. Her pink hair flowing freely over her shoulders, she would be wearing a white flower printed veil covering below her eyes, a slightly transparent one that tied at the back of her head with bead-like strings. She had wanted to leave some of her identity behind, and would even make a new name for herself, for the sake of the mission. Ami had worn her blue contacts as well, conveniently hiding her kekkei gekkai from her potential mission partners.

As she walked through the streets, she would see two people, a girl with brown hair and a man in a cloak. They seemed to be there waiting for someone. She remembered that they were supposed to eliminate some beast that was terrorizing the village. it seemed like a straightforward enough task and Ami was glad to have some help in the process. She would walk up to them, her usual black dress replaced with a simple red-blouse and denim shorts. At first glance she would seem a little like a teenager in her attire. The girl approached the two strangers, noticing instantly that both of them had masks on. At least she didn't and wouldn't feel too awkward with her veil now, she thought to herself. As she approached the man in the cloak, she would nod her head, studying the lion's mask that was covering most of his face.

"Akiyama Senna from Debon." her voice was a little lower and raspier than her usual, her eyes traveling from the man to the woman, who was bent over studying something on the ground. Ami heard her refer to herself as Kitsune. Fitting, she supposed with a small smile under her veil, as she saw that the woman had a kitsune mask that covered most of the upper part of her face. This was going to be interesting, each of them having something that hid their face, perhaps to hide what was underneath. The girl didn't mind, as she was done with trying to know and read people any way. This was the better and less serious alternative, she supposed. In her mind she was thinking about the beast and that she wanted to finish this mission as quickly as she possibly could.

The first person to appear from the group of three that the village had called upon was a woman russet colored hair lady who would wear a mark of a fox. She was bit a strange at first as she would walk up to shinigai. She would giggle a bit as she would make a joke about the two of them wearing a mask. 'Does she think that she's funny?' Near would say to Pride as he would dart his eyes to the side as if he was glaring at the demon for making a comment. Pride would not reply to the woman's joke but he would listen to her as she would move to the damaged village gates. Kitsune had been her name. A strange name for someone to name their child but pride knew well enough that this woman had something to hide just like he did. 'S-she gave a name.... pride... what will you say?' the voice of shinigai would appear in the depths of his mind as he would ask what name the man would give the young kitsune girl.

Turning to look at her he would begin to part his lips before yet another person would walk up to the plate of the mission. A smaller girl that would have long pink hair and a bead veil that covered her face much like their mask would cover their own. 'Females... they're gonna drag us down ya know! I thought debon was known for its burly men and fights! where are those men at?' pride would seem to get a little irritated as he would accidentally speak to Near with his mouth saying, "Quiet!" He would say with a low but loud voice. Suddenly he would look back at the two women and nod at the two. Kitsune and Senna were their names. Suddenly he would speak once more. "I am... Pride... Farron." Pride would say. What was there to fear using this combination of his name. Most people who lived in his village had no idea of the Farron tribe and his mother was written down as a River when she had died. But something would strike the thought of the man he would stare at Senna for a few seconds before talking again. Sure he had not gone around and met every person in debon but he had been in the village for a couple of weeks and had yet to see this girl. Who had she really been?

"If you two read the mission... even if it was just the title I'm sure you know what we're up against... That beast that is built much like a large worm has been spotted multiple times in and near the village. If we take it out they should be fine for the time being. However we do this we need to either draw it out or find where it lives and kill it!" Pride would say as he would begin to walk forward out of the village. This was something he needed. Something to get his mind off of things before the world would slap him in the face once more. As he would begin to stroll through the forest near the village of debon he would hope that the two women would follow behind him. "Ahead!" he would yell out to them. There had been something large ahead. Something that dug into the depths of the earth as he would stand over it he would look into the darkness of the hole. Picking up a nearby rock he would drop it down into the hole and wait for it to hit the ground. one.. two.. three.. four... clack. The sound would echo a bit. "We shall enter here!"