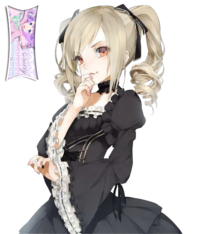 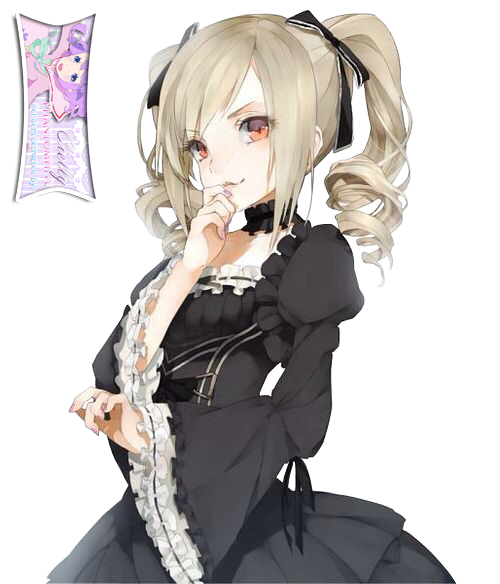 
Appearance: Amaterasu is much like the dolls she plays with: perfect, beautiful. With porcelain colored skin, amber colored eyes framed in thick, long, dark lashes, a dainty nose, and naturally rosy pink lips she is a symbol of innocence and perfection. Her blond hair, which hangs down to the small of her back when left down and straight, is almost always worn up in two perfectly symmetrical pigtails, the pigtails themselves curled into wide spirals, with a sweep of bangs left across her forehead and hanging down the edges of her face such as a picture frame would frame a beautiful work of art.

She is especially petite, at just five feet even in height, and weighing an even one-hundred and twenty pounds, she is certainly small of stature. With enough meat on her bones to give her an hourglass figure, ample bottom, and a C-cup bust, there is enough to her to ensure she looks feminine without it going over the top. Each portion of her body seemingly in proper proportion with one another.

Amaterasu dresses with the ultimate care: dresses made of expensive fabric and lace, the latest designs, stockings always free of runs and tears, dress shoes always polished to a shining mirror finish. Each piece is meant to match, with nothing out of place or out of the norm. Not a single spec of dirt resides upon her appearance, no hair out of place, as if she were nothing more than a living and breathing human doll.

Personality: Amaterasu is very much like a doll: perfect and unmoving on the outside regardless of the situation. No sign of her inner feelings, no flicker of emotions, just a perfectly preserved doll-like composure that is neither happy nor sad, but a sort of in between. This isn’t to say, of course, that she does not feel emotion - for surely she is human in one regard or another. However, it was drilled into her from a young age to be the perfect lady, to never allow her emotions to rule her, that she always must keep her composure regardless of the situation at hand - to be like the dolls she played with in their frozen beauty and impeccability. Therefore it can honestly be said that it’s likely rather frightening to face her - to find yourself staring at the tip of a blade or other instrument of murder or pain that is being weilded or controlled by someone who looks utterly benign and unaffected by the whole ordeal.

There are certain aspects of Amaterasu that slip through the cracks of her doll-like persona, however, regardless of the emotional perfection she strives for, if one only knows to read between the lines. For starters she is a young lady who doesn’t like to take no for an answer. This isn’t to say that she’ll be outright defiant in the moment, but rather subtly. She’ll follow the path she wishes until she fulfills her goals regardless of what her superiors say, though she will hide it to the best of her ability: not an outspoken rebel, but a rebel nonetheless. She is also loyal to a fault, willing to side with those she considers friends regardless if she can see the right or wrong in the situation at hand or not. She’ll stand up for those she cares for without a second thought, and will follow them into the depths of hell, chaos, and evil just the same as she would follow them into the embrace of heaven, peace, and good.

She is almost obsessive compulsive about her appearance, wanting to be like the dolls she has: perfect in every way. Dirt and grime have no place upon her appearance, and the easiest way to see her temper slip is by ruining what she strives to keep up. Most would likely think this is due to a mental disorder of some kind, but in reality her dolls were all that really kept her company, their never changing, never altering stature: they were her companions when she was but a young girl, her parents always off doing something, her nanny too busy with her hands full of Amaterasu’s siblings.

Not one for the spotlight, she will take the stage if it furthers her plans. Preferring to simply listen and watch from the shadows, it’s still well within her ability to play the star, the perfect host. The right words flow freely from her lips, proper manners and gestures opening doors that would have remained closed to another.

Likes: List 3 of your characters likes
Dolls and puppets.
Reading and studying.
Tea and biscuits.

Dislikes: List 3 of your characters dislikes
Filth and grime.
Braggarts and idiots.
Being told “no”.

History: Amaterasu’s beginnings were far from humble: born into a wealthy family, she was but one of four children. With both of her parents constantly off at parties, or off on business trips, Amaterasu and her siblings were left in the care of their nanny. Amaterasu and her family never wanted for anything, they never went without, it could even be said that they always got what they wanted even if they didn’t need it, yet it was still a lonely life for the young girl. The calmest and most well behaved of the four children Amaterasu rarely received attention from her nanny let alone her parents. The attention she received was always a lesson of some kind, normally at the hands of her mother. As the only girl of the family, Amaterasu was taught at a very young age all the things that would make her a proper young lady, a beauty of society, a mark of perfection upon the world.

Manners was one of the first lessons instilled upon her: how to eat, how to sit, how to speak and when, how to greet someone properly. Then came the lessons of never having a proverbial hair out of place: “slumming” was not acceptable, even in a lady’s own home, and Amaterasu was no exception to this. From the time the sun rose till it set she was expected to be dressed to the nines, as beautiful and stunning as possible. Temper tantrums, throwing fits, doing things to seek attention, these were all forbidden and swiftly punished - it was simply not how a lady acted. A lady was expected to have more control over herself than that, and this was her mother’s wish of her. It wasn’t hard, with how little attention she received outside of these lessons from her mother, the majority of her time was spent around dolls and puppets the sort that were appropriate for a little girl of her status to play with - unbroken, beautiful, and perfect. It didn’t take long before the young girl found herself comparing herself to the dolls she played with, and such things can never end well.

While there wasn’t anything Amaterasu could ever need or want it never stopped her from asking for things at random, usually items that were deemed highly inappropriate for a young girl such as herself by her mother: anything from toys deemed suitable for “boys” such as fake swords for swordplay, or being able to go with her brother’s when they ventured off to climb trees or whatever else it was little boys got up to when they slipped off from their nanny. It was almost like Amaterasu was constantly testing the waters, seeing how far she could push her parents, but there was more to it than that. Through trial and error she began to learn how to convince people to give her what she wanted, starting with just her parents, but beginning to branch out slowly. She learned to manipulate, to control in a way, as if everyone were nothing more than puppets that needed the right strings pulled to do what she willed them to.

It was because of this ability to manipulate people that Amaterasu eventually convinced her mother to allow her to join the Ninja Academy such as her three brothers had done - much to the pride of their father. Her mother had been completely against it, saying over and over again that a young lady had no business in such a place. Perhaps it was curiosity, or perhaps it was simply because Amaterasu didn’t like being told no, but either way she played the manipulation game well, pulling the right strings. She convinced one of the teachers in charge of the more feminine aspects of the shinobi training to come to her house and speak to her mother, and the words of the woman won her mother over - her mother finally recognizing that there were indeed skills being taught that might benefit her daughter. She was signed up and accepted the next day.

Whatever Amaterasu expected the Academy to be, she surely wasn’t prepared for it. Having never truly done manual labor, let alone fought, she was severely underclassed against the rest of her peers. Fights were lost a plenty early on, and she had to learn the hard way to rely on her wits rather than any false sense of strength or speed she might have. Yet, she wasn’t a quiter, and she surely wasn’t going to go home with her proverbial tail tucked between her legs just to see her mother’s smug face at her failure. So, she kept at it, and continued to push through, relying on the strengths she was slowly finding out about herself, such as puppets. Better than the little finger puppets or string puppets she used, these were instruments of murder, and gave her a reason to play with the “toys” that were always denied to her that her brother’s used so often in their various games they played with one another. She quickly became as obsessed with puppets as she was with her dolls at home, and it gave her something to focus on, a way to cope with her other shortcomings.

The more she learned the more she excelled, and the creation of her own puppets became her top concern: she didn’t want to use something someone else created, but rather something of her own creation, something she could deem perfect. The aid of these puppets began to get her recognized, her lack of emotion as she fought only adding to the terror of what these little creations of hers could do. By the time she graduated she had earned herself the nickname of “Murder Doll”, a name that would surely stick as she started her life as a Genin - much to the shock of her three brothers, father, and especially her mother. Regardless of anyone’s opinion on her success, she was eager for more, her mind way into the future with grand schemes and plans to play out, her focus on the building blocks she would have to achieve in order to pursue her later goals.