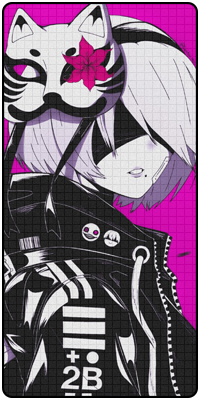 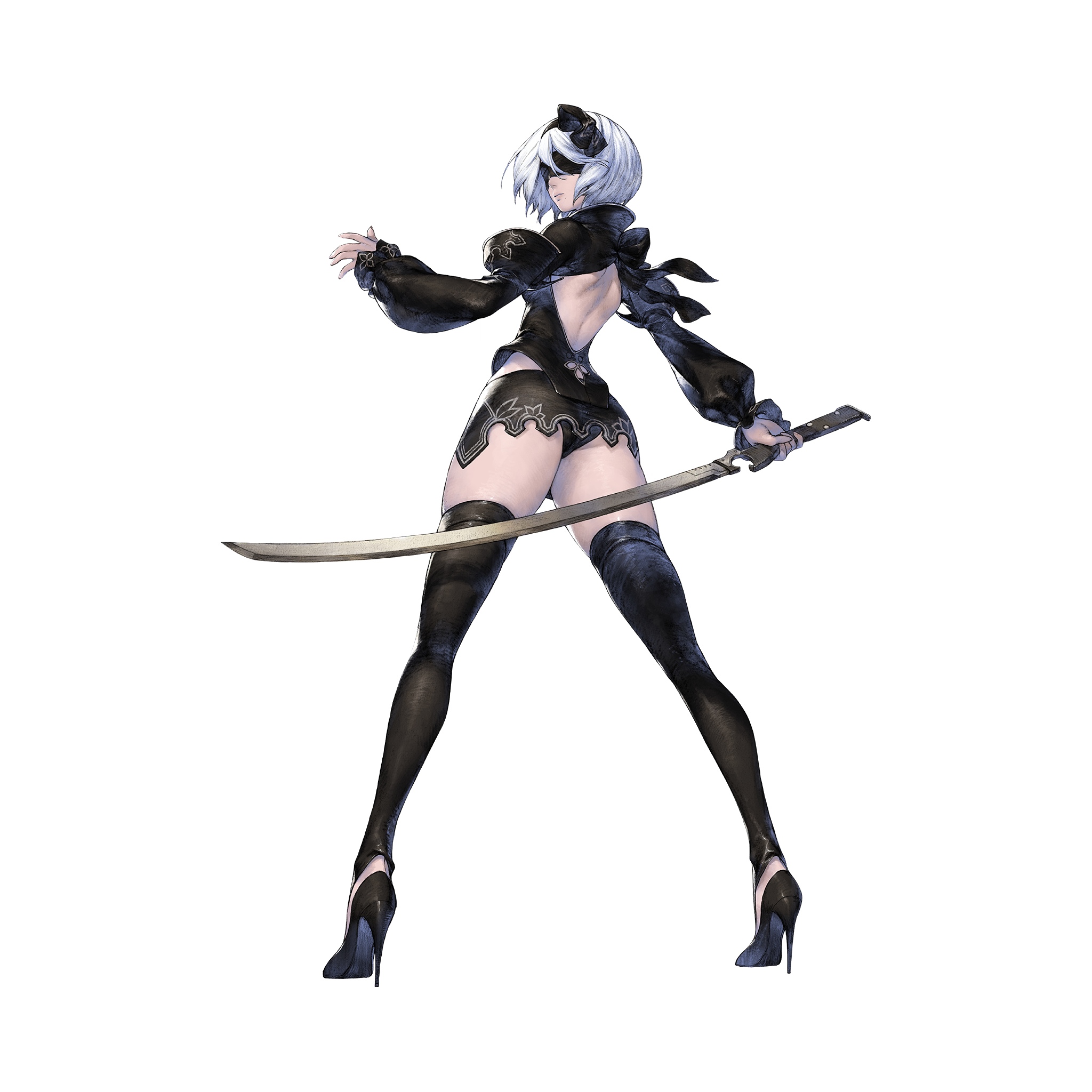 Sakuga can be described by most as a tall, slender, and shapely woman with short platinum white hair and white colorless eyes. When it comes to her facial features, it is noted that Sakuga is a bit more mature in the face, having very sharp and defining features along with a beauty mark on the left side of her face by her lip. Her normal attire tends to consist of either dark or light colors, normally white or black and doesn't really mix colors. Because she can't see, sometimes she wears a blindfold over her eyes as to not have to worry about blinking or drying out her eyes. Sometimes it's a piece of cloth other times it's her forehead protector.

Personality: Despite not being raised by her, Sakuga has a lot of personality traits that her birth mother had. These would include her stubbornness and her short-temper, though the former meshes well with some traits that she picked up from her adopted parents, such as her overwhelming kindness. Combined, this makes Sakuga the type of person who will aggressively, basically forcefully, offer a person help while also being quick to anger, especially when someone refuses her aid. Sakuga is known by her friends as someone with a headstrong personality, being the kind of person to follow what they believe in to a tee and doesn't let other people influence her decisions. She's brave but also a bit reckless, often forgoing the smaller things in pursuit of a bigger goal. In group settings, she tends to fall in the position of the leader or enforcer of rules, this trait making her both gain and lose a lot of friends.

In a combat setting, Sakuga is surprisingly level-headed, never really letting her enemies taunts getting to her and just focusing on victory over anything else. It's rare for one to find her making mistakes in a fight, and even then if she does then it's most likely on purpose because when it comes to her techniques and the execution she wants to get everything right. She wants to show that her practice wasn't for nothing and that her disability was just a minor setback and it doesn't define who she is or what she does.

Likes:
- Chocolate anything, it's her favorite flavor
- Silk, she likes how it feels against her fingers
- People who don't use her blindness as a reason to be her friend
Dislikes:
- People who ask her dumb questions, especially about her disability
- Over-attached animals, tends to be dogs
- People who stare, though she doesn't notice unless someone tells her

History:
The circumstances surrounding Sakuga's birth were bizarre and difficult, but happened none the less. See, Sakuga was born as the daughter of an incredibly dangerous missing ninja known as Onna Nadeshiko, a wanted criminal of both villages for acts of violence and disregard for laws. Somewhere along the way, she had an intimate relationship with a man, she couldn't remember who he was or where it happened, but it definitely happened as she found out soon after that she was then pregnant. This provided a plethora of problems for a woman on the run, but Onna was resilient and stubborn so she always found a way to make it work. That was until roughly 9 months later when the child was born.

See, Sakuga was born blind, meaning that her world was a whole lot different than a lot of other people's right off the bat. Not only that, but Onna was ill prepared for being an actual mother, and while on the run had come to the conclusion that there was no way she was going to be able to raise this child. So Onna left Sakuga on the side of Kataki Road, and it wasn't long before somebody came around and took in the child. Sakuga ended up keeping her name mainly because her mother made it very clear who she was and what situation she was in on a little note.

Growing up with her foster family, Sakuga definitely faced some challenges, but also had some benefits. See, both of her parents were ninja of Nikkousato, so at least Sakuga had a place she could call her own. Being told how she was found by her parents and then what they do for a living, Sakuga, like a bunch of other children, decided at a young age that she wanted to become a shinobi just like them. This would be her dream all the way into adulthood, and every time she would bring it up with anybody, they would all either give a confused reaction or pity her. Despite this, Sakuga kept pushing forward, and when she was a teenager she learned about her birth mother and the crimes she had committed. This made Sakuga even more proud of being a Nadeshiko, just look at how much of a badass her mother was! But it also made her curious about what the woman was like, and why she did what she did, both the crimes but also abandoning her child too.

You're now ready to make your Character Sheet.